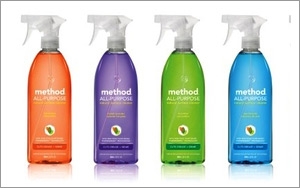 Now Method is further embracing online endeavors with a fully immersive online experience created in partnership with its digital agency of record, Essence.

Under this new campaign, Method and Essence are teaming with digital media shop Vox Media to launch "method home" starting October 19. The platform consists of three different virtual rooms - a kitchen, dining/living space and bathroom - and the floorplan will be hosted on three Vox Media sites via a microsite.

Each room has eight hotspots that provide a "unique, shareable experience that lasts less than 30 seconds," according to the companies.

"We wanted to create a vibrant, immersive experience for consumers to explore our brand pillars of design, fragrance and color through our core products," says Emily Zwerner, digital manager, Method. "Creating this aspirational home brings that experience to life through the eyes of method-minded influencers."

Then in order to drive traffic and awareness to this platform, Vox Media is introducing custom content on three of its sites, Curbed, Eater and Racked. These popular Vox Media sites will serve as the key content distributors as well as provide additional customized support. For instance, Curbed will host a poll asking readers to vote for their favorite room in the house, while Eater will create a custom interactive heatmap showing where select online influencers go for the best ingredients, kitchen supplies and other items.

Here is a link to Henderson's video.

"We selected Vox Media for their creative expertise and premium reach," says Zwerner. "Sites like Eater, Curbed and Racked align well with our target consumers’ interests and the rooms in the home we wanted to bring to life. We also partnered with Maker [Studios] for their access to high quality talent + premium production capabilities."

In addition, the cross-platform experience will be supported via paid media. This campaign is part of the #stylebymethod campaign, which earlier this year curated a clothing collection with ASOS in promotion of Method’s 4x Concentrated Laundry Detergent.

These channels are designed to connect with Method's loyal consumers, sharing a passion for design, color and style rather than speak to a general audience. "The method home program is reaching method's core target audience - we know they care about style and design and value brands that are a reflection of themselves," says Zwerner.

Meanwhile, Method has quietly separated from its creative shop Mekanism to currently work without an official creative AOR.  Essence has served as Method's digital media agency of record for the past two years. San Francisco-based Method is owned by Belgium-based Ecover.