Shhh - Mitch Oscar Has A Secret: This Time It's Programmatic

Madison Avenue “televisionary” Mitch Oscar has quietly begun organizing a cross-section of industry players around another area vital to the future of television: programmatic. Actually, the initiative, which until this blog post has been operating in stealth, is focused on two disparate approaches to improving TV targeting and efficiency: programmatic and so-called “addressable” TV advertising.

While the lines of distinction may seem semantic to some, one of the key objectives of the group being organized by Oscar is to help define the parameters, distinctions and perhaps most importantly, the practical application of the two approaches to improving TV’s audience targeting efficiencies.

Oscar, a long-time Madison Avenue “futurist” who is best known for spearheading his “Collaborative Alliance” meetings, “think tanks” and test beds at Aegis’ Carat and Havas’ MPG, is now Programmatic TV Strategist for US International Media, the burgeoning independent media services agency founded by Dennis Holt, that likes to go its own way on things. What’s important about Oscar’s new role is that, unlike his other recent agency gigs, he actually controls media-buying budgets earmarked for programmatic and addressable TV advertising buys.

To date, he and Russ Zingale, the president-East Coast at USIM, have implemented a series of programmatic and addressable TV buys for a client that had not been using TV in recent years, Aruba tourism. Because Aruba concentrates on very specific targets, national TV ad buys and even spot TV market buys were prohibitively cost inefficient, so Zingale and Oscar turned to programmatic and addressable to see if they could gain some meaningful returns on Aruba’s media investments.

So far the results are very promising, and much of what was presented at the “Secret Society’s” inaugural meeting last week focused on the results of those tests. While not an explicit control study -- USIM so far has not fielded them a concurrent A/B test -- both the programmatic and addressable TV buys showed advantages to conventional TV advertising buys, and much greater results on the dollars spent in terms of awareness, brand lift and conversions of tourism travelers to the island destination.

“Addressable television was their ability to get back into television,” Zingale said of Aruba. To date, USIM has fielded addressable buys using the household-level targeting of satellite TV operators DirecTV and DISH and cable operator Cablevision.

Those buys focused geographically on markets and households known to be high indexing targets for tropical island travel, including empty-nesters and households with children.

Zingale said both approaches are showing promising results, but that so far the addressable buys are generating higher yields. He attributed that in part to the fact that USIM has put bigger budgets behind the addressable buys and that the “heavier weight” might make it difficult to compare the two strategies directly.

Overall, he said USIM is happy with both approaches and will continue to experiment and learn, and much of what he and Oscar presented at the secret meeting had to do with what they’ve learned about the two different TV buying methods, but especially programmatic, which doesn’t necessarily fit neatly into historic TV buying mindsets, including the ability to do post-analyses of schedules that ran.

While the programmatic buys generated improved results and efficiencies vs. conventional TV ad buys, Oscar showed data indicating that the mix of networks and dayparts were all over the place and it was difficult to find meaningful patterns from it.

And when he asked the programmatic TV suppliers to provide a schedule of what actually ran, it generated a report with 163,866 lines of code covering 3,563 pages, something most traditional TV buyers and advertisers might not consider practical to evaluate.

Much of the rest of the focus at the seminal meeting focused on standards and definitions across the burgeoning programmatic TV supply chain, which is beginning to emulate digital’s, including an array of SSPs, DSPs, DMPs, trading desks, etc., but with even blurrier lines of distinction.

“It’s the Wild West out there,” said Brad Smith, senior vice president of revenue and operations at Videa, a company that could best be described as an SSP, or a supply-side platform enabling suppliers of TV advertising inventory to make a programmatic marketplace with traders and media buyers.

The  key to making that work efficiently, Smith said, is defining and harmonizing the data that will drive programmatic television buys.

“I don’t care who the supply-side is, or the demand-side is,” he said, “the key is making sure that whatever kind of data they need, we have it.”

More than 40 companies so far are participating in the secret society, including at least two direct competitors of USIM -- independent Horizon Media and MDC Partners’ The Media Kitchen and Varick Media Management trading desk. That’s always been an important signature of Oscar’s alliances, pulling competitors together in an effort to move the industry forward.

Just how secret the society will remain likely will be a function of how secretive its participants actually want to be. Oscar distributed black and white party masks during the session, but nobody actually donned one for anonymity sake.

But until this post, nobody outside those invited has known anything about it.

“I told everyone it was a secret society,” Oscar said, adding, “And so far nobody I didn’t tell knows about it.” Well, now some others do to. 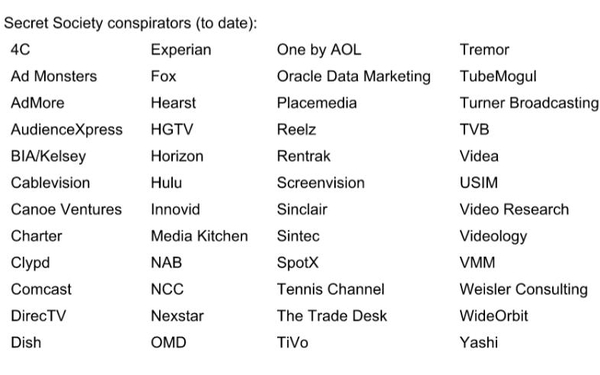