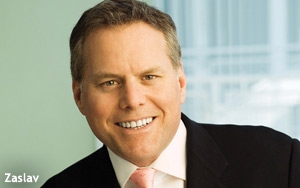 Some senior media executives are at odds about whether selling TV programs to Netflix, Amazon and other digital video platforms is good for business in the long term for content owners.

On CNBC’s “Squawk on the Street” on Tuesday, David Zaslav, president/CEO of Discovery Communications, didn’t think it has worked all that well. “We have all been enamored with all these devices. And we have sold our content for a lot of these devices and to [platforms], and created business models that don’t work.”

“I disagree,” says Les Moonves, president/CEO for CBS Corp. “Dealing with Netflix, Amazon  and Hulu — we have made over $2 billion in four years from those services.” Barry Diller, chairman/senior executive of IAC/InterActive Corp, chimed in: “He has made a fortune.”

Siding to an extent with Zaslav’s position, Senior Research Analyst at FBR Capital Markets, CNBC, Barton Crockett said, speaking later in the day: “In the entertainment part of the TV ecosystem, you've got some trouble.”

He added: “Les [Moonves] is clipping a $2 million check — that’s great. In the meantime, there are a lot of questions among investors about the durability of the traditional TV network stocks, given their reliance on audiences that are increasing watching Netflix when it comes time for entertainment.”

Good news -- content still rules, and so do those who create it. “The winners are going to include the major content companies that would likely remain at the top of the food chain,” says Tuna Amobi, senior media and entertainment analyst for Standard & Poor’s. “We have buy recommendations for a lot of content companies."

But when it comes to new digital media video platforms, as well as those traditional pay TV providers, there will be big changes. Amobi says: “In a world of platform agnostic delivery, there is going to be major shakeout over the next several years, in no small measure because of over-the-top video.”