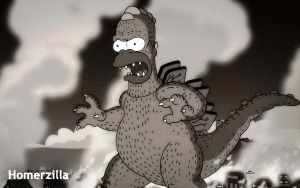 In its 26th go-round, “The Simpsons” packs an awful lot into one half-hour “Treehouse of Horrors” Halloween special.

Most notable is the piling on of references to past “Simpsons” history in this year’s annual anthology of horror stories airing this coming Sunday (Oct. 25) and which I got to preview the other day, thanks to Fox.

References to past glory are perhaps inevitable for “The Simpsons,” given this show’s now-mythic heritage. Among these is an elaborate “couch open” -- the show’s traditional opening sequence ending with the entire family on the living room couch -- in which the grave of Frank Grimes plays a key role. He was a character who died in 1997.

In another example, career criminal Sideshow Bob notes that he has been trying to kill a 10 year-old child -- Bart Simpson -- for 24 years. And the slobbering space aliens Kang and Kodos make their customary appearance -- an annual tradition in these “Treehouse of Horrors” specials -- in which they complain that they’ve only been given a cameo this year and then note how the dimensions of the TV screen have changed since the 1990s.

“Treehouse of Horrors XXVI” airs this Sunday (Oct. 25) on Fox -- a sure sign that Halloween is upon us. The episode’s three stories include the aforementioned Sideshow Bob story -- in which Bart is once again his quarry; and a “Godzilla” spoof done in black-and-white and located in “Springfield Prefecture.” Homer plays the monster of the title who terrorizes Japan.

“Simpsons” devotees of a certain age will likely remember Frank Grimes (he was a nuclear plant employee who died of frustration over Homer’s incompetence in one of the show’s most memorable episodes), and they will laugh knowingly over Sideshow Bob’s continual efforts to eliminate Bart. And of course, “Godzilla” is known by all. Or is it?

The history of “The Simpsons” covers such a long era of cultural history that it’s entirely possible that some younger viewers will see this black-and-white segment featuring Homer as a marauding dinosaur from a 1954 movie and have no clue what it is. A similar phenomenon may occur with the show’s third segment -- a spoof of the 2012 movie called “Chronicle.”

Older people might be clueless about this story about youngsters who discover a magic substance that gives them superpowers. I had no clue what this segment was referring to, and had to go in search of information via Google, which didn’t exist when “The Simpsons” started its series of annual Halloween horror shows. Google was incorporated in September 1998, according to Wikipedia -- a few weeks before the ninth “Treehouse of Horrors” would air on Fox. By the way, Wikipedia was founded in 2001, more than 10 years after this “Treehouse of Horrors” series got underway.

The couch open featuring the ghost of Frank Grimes was created and produced by a guest animator, John Kricfalusi, best known as the creator/producer of “Ren & Stimpy,” which, incredibly, dates back to 1991-95 on Nickelodeon. Is it really that old? It seems like it was only yesterday…

Fear not, older viewers -- some time during the Sideshow Bob segment, a song plays over a montage of Sideshow Bob scenes with Bart that you will instantly recognize. It’s “Accidents Will Happen” by Elvis Costello, a song first released in 1979.

For younger viewers wishing to learn more about this song, the album on which it appeared (“Armed Forces”) and Elvis Costello, may I suggest Wikipedia?