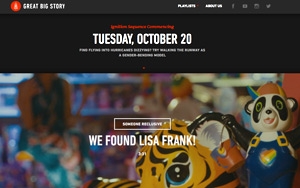 An announcement says it is “not a news network,” but that it will seek “awesome, untold and inspirational stories about new frontiers, the human condition, planet earth, tastes and flavors.”

It says it will be “CNN like a sugar daddy on the weekends.”

Digital video will run on Facebook, YouTube and Apple News, among other sites. Connected TV platforms -- Apple TV, Roku, Amazon and Chromecast -- will follow soon after.

Great Big Story will send three to five videos each day of different lengths. The service also plans to release a short film in November. The digital video service won’t have any pre-roll advertising -- but there will be sponsors creating branded content.

The social video network unit will start with a staff of 30, culled from places such as BuzzFeed, Vox, VICE, MTV, ABC, NowThis, Amazon and Yahoo!

CNN executives Andrew Morse and Chris Berend founded the idea for the network.