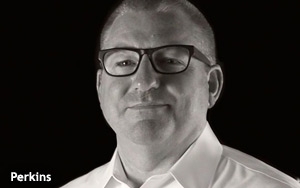 Perkins will report to Steve Bernstein, President of Bernstein-Rein.

Location played a role in luring Perkins to the Kansas City, MO-based agency. "I had a great run with [StrawberryFrog] but this opportunity came my way and it was something I could not say no to. It's a much bigger agency - with 150 people - and a legacy of innovation in how they work and build business, both for clients and the agency.  And I'm a native mid-westerner so this is a home coming of sorts."

Still, his departure came as a surprise to StrawberryFrog, with founder/CEO Scott Goodson stepping in as interim Managing Director. The agency is currently in discussions with a select group of candidates for the MD position.

"We wish Chris only the best in his new role," says Goodson. "He is a classy professional who helped us make some big leaps the past 18 months. He told us that he's moving on to a bigger opportunity, which of course happens in our sector. One of the challenges of being a standout strategic and creative agency in NYC is our talent are sought after and do great things."

Perkins has more than 20 years of experience overseeing brands such as McDonald’s, Wendy’s, HP, Microsoft, Shell, Pepsi, DHL, Jack Daniel’s, and numerous others.

Bernstein-Rein is one of only a few agencies to create and own its own retail business – Beauty Brands – which it developed in partnership with a private equity firm last year.