Resistance Is Futile: When Watson Conquered Mankind On 'Jeopardy!' 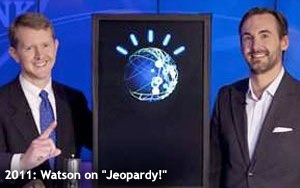 IBM’s Watson commercials are reviving memories of one of the best TV stories of 2011: The IBM supercomputer’s three-day battle with two “Jeopardy!” champions.

One of those champions, Ken Jennings, is in one of the Watson spots -- which puts him in improbable company with Bob Dylan, who is in another one.

In the Jennings Watson commercial, he and the supercomputer get caught up with what each of them has been up to since they first “met” for three days of “Jeopardy!” shows that aired from Monday, Feb. 14, through Wednesday, Feb. 16, 2011.

In the commercial, Jennings -- who holds the record for the longest-winning streak in “Jeopardy!” history -- tells Watson he wrote several books and went out on a speaking tour. Watson tells Jennings that he (it?) learned Japanese, among other enhancements and improvements undertaken by IBM over the last four-plus years.

Back in 2011, Watson was the victor in the three-day contest of man vs. machine, but in the process also revealed various quirks and oddities. For example, on Day One, when one of the answers was a 20th-century decade, Jennings wrongly guessed “What are the ’20s?” Then Watson answered in his “computer” voice: “What is 1920s?” To which Alex Trebek responded patiently: “No-o. Ken said that.”

The correct response was the 1910s, given by the other “Jeopardy!” champion on the shows that week --  Brad Rutter (he’s on the right in the photo above, with Jennings on the left, Watson center).

On Day Two, Watson answered a “Final Jeopardy!” question whose correct response was “What is Chicago?” with an answer to which the supercomputer affixed five question marks: “What is Toronto?????” The computer’s “Final Jeopardy!” wager was the odd sum of $947. The machine’s “reasoning” behind this wager was not explained. Despite its wrong answer in “Final Jeopardy!,” Watson won Day Two by a wide margin.

“The ‘Toronto’ answer was a rare lapse for Watson as he demonstrated a breadth of knowledge beyond the ability of mortal humans,” I reported at the time, applying the human pronoun “he” to this machine. “Unlike men and women, who have strengths and weaknesses when it comes to the diversity of each person’s body of knowledge, Watson seemed to know everything -- from Christchurch (the second-largest city in New Zealand) to the Church Lady, one of Dana Carvey’s famed characters on ‘ Saturday Night Live’ (the category: Church & State).”

Indeed, as explained on Day One of the three-day “Jeopardy!” Watson competition -- and in a special episode of “Nova” about Watson that aired on PBS the previous week -- Watson had been programmed with so much information on so many different topics that it was capable of making various associations with key words in the questions that would steer its electronic brain toward the correct answers.

And this worked well enough for Watson to emerge as the winner on Day Three of this unusual series of “Jeopardy!” shows by a wide margin. (Day One had no winner because there was insufficient time to play a full game, since about a third of the show was devoted to explaining the science behind Watson.)

Despite the computer’s overwhelming victory on Day Three, occasional lapses in reasoning were apparent. For example, I reported: “for one Daily Double question in a category headed ‘Nonfiction’ (on which Watson wagered one of his unusual sums -- $2,127), Watson’s answer made no sense. The clue was: 'The New Yorker’s 1959 review of this said in its brevity & clarity it is "unlike most such manuals, a book as well as a tool".' The answer turned out to be: 'What is 'The Elements of Style'? But Watson answered, 'Who is Dorothy Parker'?"

Nevertheless, "Jeopardy!" champ Jennings was good-natured in defeat. Under his “Final Jeopardy!” answer on Day Three (which he, Rutter and Watson all answered correctly), Jennings also wrote: “I, for one, welcome our new computer overlords.”

For the record, the “Final Jeopardy” clue that day, in the category of “19th Century Authors,” was “William Wilkinson’s ‘An Account of the Principalities of Wallachia and Moldavia’ inspired this author’s most famous novel.” The correct response was: “Who is [“Dracula” author] Bram Stoker?”

tv
1 comment about "Resistance Is Futile: When Watson Conquered Mankind On 'Jeopardy!'".
Check to receive email when comments are posted.
Next story loading