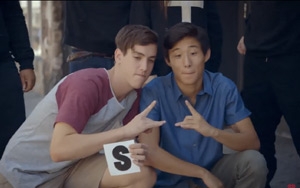 The September effort was a social driven campaign at #DestinationUnknown, with radio promotions around a listener “scavenger hunt,” involving teams of fans who tooled around Los Angeles in Tucsons trying to find -- with clues, -- the location of a secret performance by Imagine Dragons.

Fueled by digital banner ads and advertising on iHeartRadio, fans of the band were alerted to a chance to win tickets to the performance by the Grammy Award-winning band, held at a secret location.

The four teams were chosen from a pool culled from social, digital and radio ads, with the hashtag allowing them to build social community votes. Each letter of the band's name that the teams posted using the #DestinationUnknown hash, was part of an element of the program in which fans would be able to do an assist to help figure out where the band would be performing, and win for themselves a chance at VIP tickets to go to the show and meet the band.

The concert was streamed live on Clear Channel Outdoor Americas’ billboards in Times Square. It was also broadcast on iHeartMedia Alternative, Mainstream Rock and Active Rock radio stations throughout the country. Now the content is on iHeartRadio's platforms and YouTube channel, and Imagine Dragon's Vevo site, and Hyundai's video and social sites.

Dominic Sandifer, president and co-founder of GreenLight Media & Marketing, said in a statement: “The Destination Unknown campaign with Hyundai, iHeartRadio and Imagine Dragons is an example of how GreenLight creates brand engagement through compelling content and brand storytelling [by] tapping into the passion points of various artists and cultural icons.”

Hyundai has worked GreenLight since the automaker’s Re:Generation music project started in 2012 to support the Veloster compact. That program centered on the development of a documentary that challenged five of the world’s top DJs to reimagine traditional genres of music. It snagged Hyundai a bronze Lion at Cannes that year.