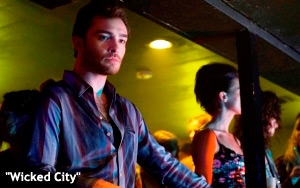 ABC’s “Wicked City” is the sleaziest piece of junk to come down the network television highway in years. It is an appalling TV show that deserves to be relegated to the nearest garbage dump as soon as possible.

Sitting through the pilot a few days ago was one of the most loathsome experiences I have ever had in the pursuit of my profession (yes, watching TV for a living is a profession). And that’s saying a lot.

The show is a police drama set in Los Angeles in the summer of 1982, principally on the Sunset Strip at the Whisky a Go Go, a nightspot that this series positions as the center of the universe.

The pilot episode, premiering next Tuesday night (Oct. 27), is an hour-long exercise in meaningless and gratuitous sex and violence -- sometimes in the same unwatchable scenes. These include one scene in which a serial killer played by Ed Westwick lures a gullible young woman from the nightclub to join him in his car for a drive to a dark remote spot somewhere in the Hollywood Hills. Then, some time after they park, she inexplicably agrees to give him oral sex, during which he withdraws a large knife secreted behind the driver’s side sunshade and stabs her repeatedly.

Later, there’s a bondage scene with this killer’s new girlfriend -- a nurse played by Erika Christensen who reveals a sadistic streak of her own. When he develops a physical problem making him unable to perform sexually (remember: this was the era before Viagra), he proposes tying her wrists to the headboard, which solves his “problem.”

Their subsequent “love-making” is then shown in such extreme, excruciating close-up that you get the terrible (and icky) feeling that you can sense their hot, foul breath against your skin. Moreover, the scene goes on for so long that you might wonder if the producers of this show decided to save money by not hiring an editor.

Elsewhere in the hour, just when you might be feeling you could use a shower of your own, a married detective on the killer’s trail will stop by his girlfriend’s place for a round of steamy naked shower sex. And then, some time later, the same detective (played by Jeremy Sisto) will receive a message from the killer directing him to a vacant apartment, where the detective will find the decapitated head of one of the killer’s victims in a box. The detective will then conclude that the killer is “taunting” the LAPD.

The time-honored Taunt of the Serial Killer is a common characteristic in TV police dramas, and the writers of “Wicked City” seem to have done their research on the subject solely by watching other serial-killer TV shows. As a result, their show plays like one long repetitive and dreary cliché.

As for this show’s 1982 time period, there appears to be no rhyme or reason for setting this garden-variety police procedural in the 1980s, since serial killers -- particularly the ones seen on TV -- seem perfectly willing to ply their trade in any era. It’s possible that the producers of “Wicked City,” along with their enablers at ABC, felt that a 1980s time frame would be a clever gimmick for drawing some viewers who have no interest in another ho-hum police procedural, but might be interested in reliving the summer of ’82 for nostalgic reasons.

Unfortunately, anyone tuning in to sample “Wicked City” in the hope of rekindling some warm and fuzzy feelings for their youthful pasts in 1982 will be very disappointed. This show turns 1982 into a year you wouldn’t want to revisit in your worst nightmare. Ditto for “Wicked City” itself, a bottom-of-the-barrel TV show if there ever was one.