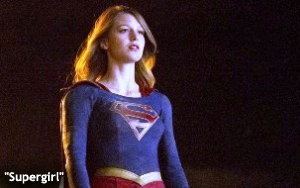 In case you didn’t notice, we’re in the midst of the new fall television season.

In fact, for all intents and purposes, the introductory portion of the new season ends this week -- and not with a bang either. Monday night brings the premiere of “Supergirl” on CBS -- the last new show of CBS’s new slate. And Tuesday night marks the premiere of “Wicked City” on ABC -- the network’s last new fall show and the worst of all the new shows that have turned up on the broadcast networks since the middle of last month.

NBC has one more new show still to come: “Chicago Med,” a hospital drama from producer Dick Wolf, but it’s not due to premiere until Nov. 17. The date is definitely in the autumn, but the show will arrive so late to the new fall season party that it could just as easily be categorized as a mid-season replacement. Fox has introduced all of its new fall shows, but for the next two weeks will reap the benefits of the World Series starting on Tuesday.

So here we are, with a fall season that feels wholly disconnected from last May’s upfronts, when the networks -- to their credit -- were whipping up excitement for the fall season. Now we’re a little more than a month into it, and the excitement has evaporated. So much hype -- and seemingly, so little to show for it.

It’s not that the network shows aren’t drawing enough viewers to make a buck. A number of them are -- “Dancing With the Stars” (ABC), “The Voice” (NBC), “Big Bang Theory” (CBS), “Empire” (Fox). They can still be relied upon to compete strongly – particularly “Dancing,” “The Voice” and “Big Bang,” which all compete against each other on Monday nights and last week drew total audiences of 12.5 million, 11.4 million and 14.68 million, respectively.

At the same time, however, all you read about is how network viewership is down generally this season, with recent reports indicating sharp declines in time-shifted viewing as well compared to last season.

For example, Fox earlier this season insisted that “Scream Queens” was making up for its paltry time-slot viewership on Tuesday nights by adding a million or more viewers via subsequent time-shifted viewing. But this show -- which Fox took pains to heavily promote before its premiere -- has to be a disappointment for Fox, although the network won’t admit it. Last Tuesday, its audience was 2.59 million at 9 p.m. Eastern.

When you look at the weekly ratings, you’re struck by how low the numbers are, especially if you’re an industry vet and can remember when network TV audiences were so much bigger. My own anecdotal perspective comes from my own columns and stories from, say, 5-10 years ago in which I reported on the cancellation of this or that show due to ratings that today would be ballyhooed as successes by network publicity departments.

This season, a number of new shows are really taking it on the chin -- “Minority Report” on Fox, with 1.82 million viewers last Monday; “The Grinder” with Rob Lowe, at 2.36 million Tuesday night on Fox; “Heroes Reborn” on NBC, with 3.8 million last Thursday; and “Best Time Ever with Neil Patrick Harris,” with 4.81 million on NBC last Tuesday.

From a qualitative standpoint, the new shows as a group are subpar. Sitcoms such as “Dr. Ken” on ABC and “Life in Pieces” on CBS seem just like the same-old, same-old. Dramas like “Minority Report” and “Heroes Reborn” have nothing new to tell us either.

If the popularity of comic book adaptations still has strength, “Supergirl” might do well on CBS tonight. The network was hard at work promoting it during the Jets game on Sunday. But talk about a tired concept -- “Supergirl” is hardly likely to get anyone marveling at the creativity of network television.

For my money, the brightest new show of the fall season is “Crazy Ex-Girlfriend” on the CW. But the show drew an audience of just 790,000 last Monday followed by “Jane the Virgin,” a show that does get widely talked about but whose audience amounted to just 840,000 viewers last week.