Discovery's 'Exorcism: Live!': The Devil Is In The Details 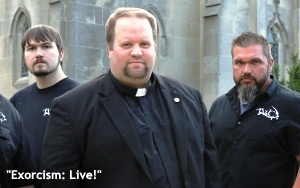 Sorry to be the bearer of bad news, but you won’t see a girl rotating her head 360 degrees while in the throes of demonic possession in Friday night’s “Exorcism: Live!” special on Destination America.

You might think this is the kind of spectacle one would see in a special like this because -- let’s face it -- the only exorcism that most of us are familiar with was the one performed on Regan MacNeil (Linda Blair) in “The Exorcist” back in 1973. Regan, 12, famously twirled her head, vomited dramatically and slung vile invective at her mother and a pair of priests.

No such luck with “Exorcism: Live!” unfortunately. In this show, a house in St. Louis is to be exorcised -- not a human. The press release from Destination America says an exorcism performed in the house in 1949 served as the “inspiration” for the original “Exorcist” novel. So there’s your connection to “The Exorcist.”

Apparently, the 1949 exorcism didn’t go so well because here we are again at the same address 66 years later trying to rid this house of demons that don’t seem like they want to leave, not even for a TV show. These recalcitrant spawns of Satan might not be aware that they are due to take part in a historic event -- the first-ever live exorcism broadcast on television, at least according to Destination America.

The network’s press release, which arrived Wednesday, took pains to emphasize the potential dangers involved in such an undertaking. “The real story was so much more horrifying than the book or movie depicted [it], making it one of the most terrifying places in America,” insists Destination America General Manager Jane Latman in a prepared statement. “Our crew and talent are now on the ground in St. Louis at this iconic home making final preparations for ‘Exorcism: Live!,’ ” she said, “ensuring that we’re taking the necessary precautions for what is truly going to be the most dangerous night in television.” Truly? The most dangerous night in television? Compared to what?

Destination America is the Discovery-owned cable channel that replaced Planet Green, a short-lived channel with programming focused on environmental issues that no one wanted to watch.

A crew of ghost hunters known as the Tennessee Wraith Chasers, who are featured in “Ghost Asylum,” will also be on hand in “Exorcism: Live!” to help wrangle the wraiths who continue to stubbornly occupy this woebegone house. The rite of exorcism is to be performed by a man identified as Bishop James Long (photo, above) of an organization known as the United States Old Catholic Church, which is not affiliated with any official Catholic Church hierarchy, according to the USOCC’s own Web site.

To me, this would be enough to call the legitimacy of this exorcism into question, even without all the other red flags indicating that this two-hour special will likely turn out to be this year’s version of Al Capone’s vault, with nothing behind the proverbial door but empty rooms. I mean, what exactly are we tuning in to see anyway -- Bishop Long splashing holy water on the walls? That doesn’t seem worth tuning in for.

And how will we know if the rite has been a success? Will cameras actually capture these spirits floating, like white sheets in an updraft, through the house’s open windows like they’re in a Casper cartoon?

This show reminds me of a special that Discovery Channel aired last December called “Eaten Alive” that was supposed to show a naturalist volunteering to be swallowed whole by a giant green anaconda. Needless to say, this did not happen, even though Discovery’s pre-show publicity gave every indication that it would.

Friday’s “Exorcism” special has been purposely scheduled for the Halloween season, which is appropriate because it seems destined to be more trick than treat.