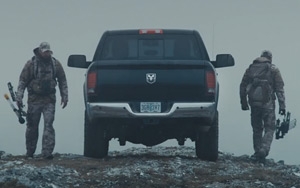 Fiat Chrysler's Ram truck division is partnering with Farmers and Hunters Feeding the Hungry (FHFH), an organization wherein hunters donate their hunt to the hungry and less fortunate. The campaign also touts the farming and hunting life, a key Ram demographic -- and of course, the brand.

The television, print, digital and social media campaign carries the hashtag #RamHuntsHunger and drive viewers to RamTrucks.com/outdoorsman. The automaker says ads will run in network and cable programming, print publications in the hunting and fishing verticals, including Ducks Unlimited,Field & Stream and American Hunter magazines. They will also be on Ram social media sites, and the social sites of Drury Outdoors and Mossy Oak, per Ram.

The campaign -- via Dallas, Tex.-based The Richards Group, comprises four TV spots -- with the voice of the brand, Sam Elliott. He talks about the rough wilderness life, intoning the brand mantra: "Guts. Glory. Ram." The anthem spot, a 60-second ad, features Ram 2500 Outdoorsman and Ram 2500 PowerWagon trucks. A pair of 30-second spots, “Donate” and “Landscape,” promote the cause and tell viewers how to participate. Print ads target outdoor enthusiasts and one promotional layout explains the program, per the company.

The 60-second spot offers stunning visuals of guys in hunting gear with bows and rifles, heading into the bush in rough weather, in canoes at night, down mountain ranges. They get to the embarkation site by seaplanes, boats and Ram trucks. Another, “Small” offers aerial views of the outback, with Elliott saying: “Some days the biggest rush of all is feeling really, really small.” The final spot is a direct call to action to support the FHFH.

Ram has featured Americas farmers in past campaigns, and even published a coffee table book encomium to farming. That campaign, which featured an ad on the 2013 Super Bowl showing farmers and using radio broadcaster Paul Harvey's "God made a Farmer" speech as V.O., was Ram's first time talking about hunger in America. As part of that Ram announced that 2013 would be "The Year of the Farmer," to kick off a year-long cause campaign.