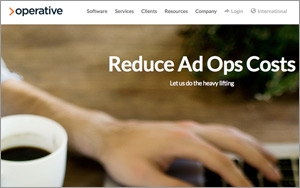 Most publishers see digital as the future of their business, but questions remain around some central issues like programmatic advertising.

Some 30% of respondents from a survey by Operative and MediaPost cite “making money from our digital properties” as the top priority for their advertising business, the most popular response overall.

The highest priority for a majority of publishers’ digital advertising team was “educating sales to sell more technical offerings,” with 19% citing this.

“Our core strategy is to be where the readers are, and to be there faster than our competition,” stated Jeffrey Burkett, senior director of sales operations and product strategy at The Washington Post. “Our readers are going to digital, so we’re applying the appropriate resources. We’re doing a lot more experimentation.”

Though the survey found that print, TV and digital publishers have different hurdles to jump, they will “all be competing with one another in the digital future,” the survey notes.

TV, print and digital publishers seem to be converging by modeling their businesses after each other.

TV publishers are focused on content for the new multiscreen consumer, while print publishers are a step ahead. They have already “weathered the massive shift in consumer behavior that many TV companies are just now grappling with,” according to the study.

By contrast, print publishers were the most “pessimistic” group of survey respondents — a majority believed that publishers are at the losing end of the advertising ecosystem, most likely because they are competing against the greater reach of TV and digital publishers.

Print companies are focused on the sales effectiveness of their current advertising business.

For example, Burkett explained that The Washington Post has a “digital university” every week for an hour over lunch to discuss a particular topic, from programmatic advertising to audience extensions.

“It’s about product knowledge. A few years ago, it would have been complete overkill, and now it’s not enough,” he stated.

Digital publishers were the most optimistic of the group, likely influenced by profitable portals, social media sites and learning to differentiate with new forms of content and advertising.

Programmatic, however, it is still difficult for publishers to master: 74% of publishers surveyed have manual or no programmatic optimization.

“One of the biggest issues with programmatic is that it’s not as automated as everyone says," Burkett stated. “It’s just a shift of responsibilities. We need to figure out ways to adjust systems to recognize information that’s coming through programmatic channels and fold that into revenue reporting, reconciliation and projections. It’s hard. All of the systems speak a slightly different language.”