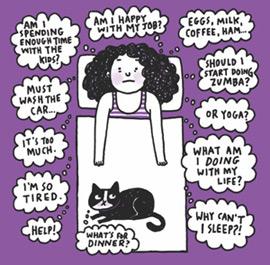 So you don’t have time to watch Bianca Giaever’s delightful 15-minute  “HumanKinda” video, eh? Got it. How about the trailer? Too harried to steal even 60 seconds from your calendar?

Well, you seem to be a prime candidate for the taking the eight-question “Are You Humankind Or Humankinda?” quiz on Tumblr. It’s one of more than 100 pieces of content — GIFs, polls, fill-in-the-blanks and memes — Jet Blue and its agency, Mullen Lowe, have created on social media platforms including Twitter, Facebook and Instagram since the video debuted last month. When you’re done, you’ll get a tongue-in-cheeky idea of where you stand — or gyrate — on the being-human scale. (See one of the Tumblr posts from JetBlue, at left.)

There are minimal references to Jet Blue in Giaever’s mini-doc, which is hosted by the actor and comedian Sam Richardson. You might recognize the airline’s Terminal 5 at JFK. And, about 90 seconds in, Richardson briefly attempts to give away a free ticket to Puerto Rico on the sidewalks of New York, with one catch: The recipient has to leave for the airport then and there. Finally, after a lot of wistful rejection, Richardson succeeds in “saving just one person from his busy-ness.” But we don’t even see the passenger board his flight.

“We shied away from telling a JetBlue story and are telling a humanity story and let Bianca run with it,” says Morgan Johnston, manager, corporate communications, for JetBlue. “HumanKinda,” as a result, takes a different tack from the airline’s usual focus on customers, crew members or the travel experience.

“We wanted to look at what was preventing people from living their lives, and busy-ness came up,” adds Phil Ma, JetBlue’s manager for brand advertising and content. “We wanted to work with an up-and-coming director who had similar interests.”

Giaever is a 25-year-old film maker and radio producer whose “the Scared is scared” short on Vimeo endearingly keeps to a helter-skelter plot that’s improvised and voiced by a six-year-old. She shot “HumanKinda” this July in New York City over three weeks.

“JetBlue is the presenter of Bianca’s story,” say Johnston. “Going too overt with putting the brand in there would take away from the message…. We allow the film to live on its own, but then continue to host and present the conversation through JetBlue’s social channels.”

The film focuses on two subjects — single-mom Jennifer and holding-eight-jobs Ryan — who let Richardson, Giaever and their crew follow them for two weeks to determine how they got so darn busy. Then, after a week away to let them absorb some lessons learned, they return. We learn, along with Jennifer and Ryan, that it’s okay to just watch ducks on a pond. Or to get some sleep. Or — gasp! — “not check your e-mail for an entire day.”

“We have always been a company about storytelling. We thrive on word of mouth, the sharing of stories,” says Johnston, pointing out that “bringing humanity back to air travel” is part of JetBlue’s DNA.

Content is growing as a percentage of Jet Blue’s overall marketing pie, Ma says, without revealing exact figures. “Like every company, we are very careful watching what works and what doesn’t through our social channels, and we’ve seen high engagement from videos, so we spend more and more resources on video,” says Johnston.

Recent examples include “Flight Etiquette,” “#NYCTakeoff,” “Wingman,” and “Election Protection.” Look for more executions in the “Flight Etiquette” series, a tongue-in-cheek approach to things like smelly food and people bombarding the gate before boarding. A third installment of “Let’s Play Airport,” a game-show-type series about fun things like security checks and carry-on baggage, is also in the works.

“From a tactical level, we’ve really shifted our thoughts on what we’re doing operationally and how we share that in unique ways,” Johnston says. “For example, today is Veterans Day, so we flew veterans and family members to visit the WWII Museum in New Orleans. … We always try to think: Is there an opportunity for us to share this? Sometimes the answer is no; we can take a backseat on this and let this unfold naturally.”

How did the marketers themselves fare on the Tumblr quiz?

“I did not do well,” says Ma. “Morgan was in the 90 percentile. I was in the 80 percentile” of HumanKinda, which is defined by one GIF on the Tumblr site as “doing a load of laundry, finishing a presentation and making a nutritious dinner — all at once.”

“I saw a lot of my friends who were also close to those results. So it was a fun thing to share and a way to reflect,” he reflects.

Hmmm. And where better to do so than a beach in the Caribbean — where JetBlue has a couple of hundred flights headed daily?