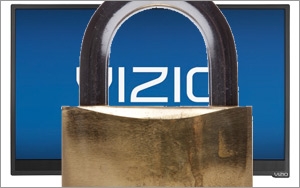 The complaint, brought by Texas resident Whitney Keeter and California resident David Watts, comes less than one week after ProPublica reported that Vizio tracks television viewers by default, and then shares data with companies that send targeted ads to people's phones, tablets and other devices.

"On information and belief, Vizio actually knew that data brokers, advertisers, or other partners would combine user identification information transmitted to it ... with information held by others to identify persons as having requested or obtained specific video materials or services," Keeter and Watts allege in a complaint filed last week in U.S. District Court for the Central District of California.

The lawsuit names Tapad, Neustar and Experian as three companies that may have received data from Vizio. (Experian recently said it doesn't currently have a relationship with Vizio, according to ProPublica.)

Vizio says in its privacy policy that it uses viewing data, combined with IP addresses "and other non-personal information," in order to enable outside companies to send people targeted ads. "These advertisements may be delivered to smartphones, tablets, PCs or other internet-connected devices that share an IP address or other identifier with your Smart TV," the company states. The privacy policy says consumers can opt out of the information sharing.

But Keeter and Watts allege that Vizio knows that anonymous data can "be recombined to identify persons."

"Vizio actually knew that it was disclosing: 1) a user's identity; 2) the identity of the video material; and 3) the connection between the two -- that the given user had “requested or obtained” the given video material," the lawsuit alleges.

In recent years, numerous online video distributors -- including The Cartoon Network, ESPN, Disney and Dow Jones -- have been sued for allegedly violating the video privacy law by sending "anonymous" data, like device identifiers, to third parties.

Questions about whether these transmissions violate the video privacy law, which predates the modern Internet, haven't been definitively resolved. Congress passed the law in 1988, after a Washington D.C. newspaper obtained and published the video rental records of Supreme Court nominee Robert Bork.

So far, several trial judges that have considered the question have ruled in favor of the video distributors. In one recent dispute, a judge in Seattle dismissed a lawsuit by Roku user Chad Eichenberger, who accused ESPN of transmitting his Roku's serial number, combined with data about videos watched, to Adobe.

U.S. District Court Judge Thomas Zilly said in that matter that sending “anonymous” data to third parties doesn't violate the law. Eichenberger is appealing the loss to the 9th Circuit Court of Appeals.