Anatomy Of A Cancellation: Hunk Of Junk Deserved To Go 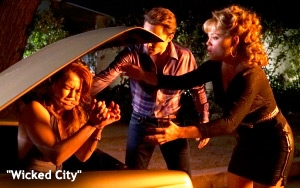 Every once in a while, justice is served.

Such was the case concerning the cancellation of “Wicked City,” the ABC drama deemed by at least one critic (OK, me) to be the worst new show of the fall season. This show about a serial killer stalking young women on the Sunset Strip in 1982 was so atrocious that for once, viewers had the good sense to utterly reject it.

The demo ratings (18-49s) followed the same downward trajectory: A 0.9 rating in Week One, a 0.7 in Week Two and a 0.4 in Week Three. Horrible -- but not as horrible as the show itself. It was a vile, gratuitously violent, repellent mess.

I can’t remember the last time I had such a visceral, negative reaction to a TV show. I really hated this one. After previewing this show a few days before its debut, my review for Television News Daily described the show as “appalling,” “worthless” and “the sleaziest piece of junk to come down the network television highway in years.”

I meant every word of it too. Looking back on it, this show was a throwback to the era when the vast majority of the shows on network TV were terrible and the network executives knew it, even while they promoted the shows at the May upfronts as if they were the greatest thing since sliced bread. There’s still a lot of that at the upfronts today, but you do get the sense these days that because of the hyper-competitive landscape they now find themselves in, the networks are at least trying to put on good shows.

“Wicked City” is an exception, though. This show stunk to high heaven, and everyone at ABC who laid eyes on it must have known it. And if they didn’t know it, that’s even more troubling. This was the kind of show that you put on the schedule when you’ve basically run out of shows -- or worse, you did have other shows, but they were even worse than this one.

What doomed “Wicked City”? Oh, just a few things -- its storyline, characters, writing, direction, plotting, casting, acting, editing, location-scouting, sets and music (horrendous pop songs from the early ’80s). But other than that …

“Wicked City” has earned the distinction of being the first and only new show to be cancelled so far in the new season. While the series itself lasted only three episodes, the fall season is now in its ninth week -- a pretty long time for only one show to be cancelled.

Some observers are taking this as a sign that the networks just aren’t as quick to pull the cancellation trigger as they used to be -- that they’re willing to accept low ratings for some shows that in the not-too-distant past would have meant almost instant cancellation.

But “Wicked City” was cancelled for more than just low ratings. It was more about the steep, irreversible decline in its viewership -- which, at the rate it was going, could conceivably have been down to zero in a few weeks.

Viewers let ABC know what the network apparently couldn’t see for themselves -- that this show was a disgrace, impossible to love and easy to ignore.