Scion Gets 'Weird' With New Ads And Digital Revamp 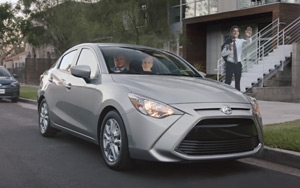 Scion’s two-month-old “Weird, right?” advertising campaign continues apace with two new TV spots that take an odd perspective on life to tout the brand as something offbeat on wheels. The effort is by agency of record of eight months Droga5.

The new ads, which went live on Wednesday, are in addition to three that launched in September with actors James Franco and Jaleel White. Andrew Gilleland, who became the new VP of Scion in September, tells Marketing Daily that “Weird, right?” alludes to a nuanced figure of speech, young-person parlance, like a man bun would have been called three years ago. Actually, one of spots features a young, hip vampire with an especially egregious man bun. Says Gilleland of the campaign theme: “It means surprising, different, something you didn't expect.

“Droga5's work reflects the realization that we have to talk to Millennials in a different way. We are trying to have fun with it, but still talk about what consumers want, while still talking about specific features.”

The vampire in the new ads is looking for a way to drink blood from a guy he picked up, the ultimate Uber nightmare. The other spot is a meta statement about advertising, with an ostentatiously diverse carload of people in a Scion iA. They are even a step beyond central casting for multicultural. They are actual cardboard cutouts of stock photos, something the voiceover says openly.

Gilleland notes that the campaign is fundamentally different from Scion of yore, when its marketing dispensed entirely with tier 1 and preferred to go guerrilla, popping up at events and offbeat media, rolling from the West Coast to the East. Now, he says, “It is about doing upper-funnel and driving down-funnel -- that's really the strategy, so it's different from past work because now we are more mainstream. As the consumer has changed, we have changed, and sales volumes need to go up.”

He says that one aspect of the Scion model is working, as 70% of people buying Scion have never bought a Toyota product, and when they do become Scion owners, their next vehicle is often a Toyota -- which, if so, fulfills the raison d'être for the brand: bring people into the Scion and as they get older and have different needs, move them up to Toyota. “We don't see a large percentage of [Scion] owners staying with Scion.”

Gilleland says Scion has redesigned its Web site to be optimized for mobile devices, a kind of Scion 2.0. That includes new shopping tools. “We want to make the Web page the center of where customers go to research, so we are working on ways to do that.” Scion has, for example, launched both a live chat, and a beta for its Pure Process transparent pricing system, where digital research assistants can take over one’s cursor to help them navigate the site. “It's different, unique, and experimental.”