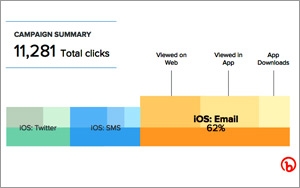 Link management platform Bitly has launched a new tool for marketers to track campaigns across channels and optimize efforts in real-time.

Called “Campaigns,” the tool is a part of Bitly’s Brand Tools, the premium dashboard that Bitly offers to marketers.

The new product takes data from different channels and gives marketers real-time insights such as which content resonates on Facebook, Twitter or on a particular device or geographic zone.

So far, more than 60 brands have used the feature, such as Comedy Central.

Dan Touchette, director, product management, Bitly, said there is potential for Campaigns data to be layered with other data sources. With the release of the new tool, Bitly can show which channels drive the most traffic into mobile or desktop web, a brand's app or app stores.

The Campaigns API will also be available for customers to integrate their campaign data into other tools.

Bitly began as a link shortener and recently expanded its services to include a host of marketing tools. Earlier this year, Bitly further enlarged its marketing offerings with a deep-linking service, aiming to drive people to mobile app pages.

Headquartered in New York, the company claims to process more than 10 billion global clicks per month.

Matt Thomson joined Bitly as chief product officer in February, while Dumont joined the company in May.