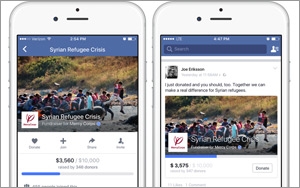 Facebook is testing a new ‘Fundraisers’ tool to help nonprofit organizations raise money and awareness directly from their Facebook Page.

Simplifying the fundraising process, users can now donate in just a few taps and share their donations with friends. To encourage more donations, all shared posts will also include a Donate button.

Now, nonprofits can also feature a Donate button right on their Page

Among its billion or so daily active users, Facebook says more than 150 million are currently connected to a nonprofit cause.

The social giant has been testing different ways for nonprofits to fund raise on its platform since 2013. Among other efforts, it has also partnered with organizations to create donation campaigns after major natural disasters, like the Nepal earthquake.

In 2010, Facebook founder and CEO Mark Zuckerberg joined a growing number of entrepreneurs that have pledged to give the majority of their wealth to charity.