Millennials, Others Planned To Eat Local And Couch Surf 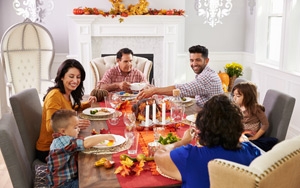 A lot of Millennials will not have cooked the same ol' bird on Thanksgiving, according to a Yahoo Food survey. Nor, one hopes, will they have forced themselves to eat tofu turkey. Many of those surveyed said they would eschew major grocery stores. Unlike the 94% of non-Millennials who will go anywhere for a big turkey at a good price, the study finds that Millennials are much more likely to go to small businesses (41% vs. 24%), or online retailers (19% vs 5%).

Survey firm Pollfish says Millennials also have more anxiety than other cohorts around this time of year. The firm did a survey this past weekend, which found that the top three post-Thanksgiving meal activities are sleeping (22.81%), watching a movie (20.08%), and drinking (18.91%). Twenty percent of West Coast respondents to the national poll of 513 Americans said they are not going to have turkey this year at all. Among Americans who will have turkey, the vast majority -- at 67.25% -- will cook the bird in the oven. A little over 10% will smoke it, and about the same percentage will fry their turkey.

The majority of respondents don't plan to actually interact with their fellow diners before dinner. The majority said they planned to watch football as a pre-Thanksgiving thing. Only 17% said they would subject themselves to watching the parade. And activities involving their guests or hosts are not of interest to most people, with single-digit responses to things like board games, outdoor activities of any kind, or playing football with friends and family.

Perhaps the biggest surprise in the study was that only 5.45% of respondents said the biggest headache was dealing with in-laws, less than half the percentage who expected anxiety from dealing with blood relatives.