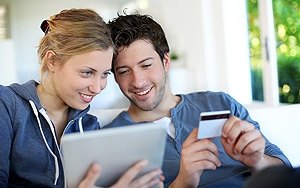 Cyber Monday finished strong, with Adobe estimating a 12% gain to a record $2.98 billion. And for the full holiday weekend, it says online sales jumped 15% to $11 billion. IBM Watson is reporting an even stronger day, with a 17.3% increase in Cyber Monday sales, and an average order of $126.87.

Adobe says sales were so brisk that out-of-stock rates hit an all-time high, with 13 out of 100 product views showing an out-of-stock message. That’s about twice the normal rate, with Star Wars figures and video game bundles (PS4 Disney Infinity and Battlefront Bundles), Xbox One Fallout 4 and Halo Bundles, and Lego Star Wars Advent Calendar among the hardest to find.

“Online traffic was so astronomical that several retailers experienced temporary outages and slow checkouts, but that didn’t stall consumer spending,” says Tamara Gaffney, principal analyst of Adobe Digital Index, in its end-of-day tally. “Dallas-Fort Worth, Chicago and Los Angeles were the largest metropolitan areas with the highest online sales growth between Thanksgiving and Sunday.”

Traffic to Target was so strong that it had to slow checkout times, frustrating shoppers who took to Twitter to complain about its #CyberMondayFail. The Minneapolis-based retailer says traffic was twice as heavy as its busiest day. “Apologies,” it tweeted back. “We appreciate your patience. Hang in there with us!”

And it says large retailers managed gains of about 12%, while small retailers grew by just 6%.

Adobe says consumers, who scored an average discount of 20%, snapped up plenty of electronics, with 4K TVs, Microsoft Xbox One, and Apple iPad Mini among the most popular, as well as toys, with Shopkin dolls, Barbie Dream House, Lego Star Wars, Lego Dimensions and Lego City leading the pack.

But those big discounts are problematic, even if the sales gains are dazzling, points out Forrester analyst  Sucharita Mulpuru. “Consumers are also out in full-force looking for great offers. That makes Cyber Monday a meek day for margins, and that is a challenge for retailers,” she says, in email commentary. “How do you find ways to meet your margin targets otherwise?”