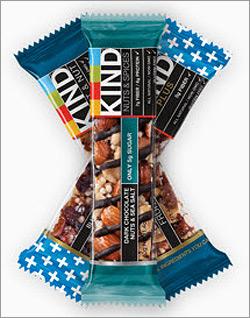 The Kind snacks brand has filed a citizen petition with the Food and Drug Administration asking the agency to update its regulations around the term "healthy" when used as a nutrient content claim in food labeling.

While Kind isn't exactly opening this can of worms, the petition turns a spotlight on how the government should best define "healthy" — another thorny, contentious issue within the FDA's already complex and divisive initiatives to update the Nutrition Facts panel and clarify what's acceptable in food and beverage claims to reflect evolving scientific knowledge about nutrition and health.

This past March, the FDA issued a warning letter to Kind, pointing out that some of its snack bars do not meet its requirements for use of the "healthy" claim. Specifically, some of the bar varieties contain more than the allowed 1 gram of saturated fat per serving.

At the time, Kind issued a statement stressing that "Nuts, key ingredients in many of our snacks and one of the things that make fans love our bars, contain nutritious fats that exceed the amount allowed under the FDA's standard. There is an overwhelming body of scientific evidence supporting that nuts are wholesome, nutritious and healthful."

In its FDA petition, Kind — which has reportedly been the target of class action suits alleging consumer protection law violations since the FDA issued its warning letter — cites evidence from nutrition studies and the current federal Dietary Guidelines, as well as the names of a number of nutrition experts supporting the petition's request.

Kind argues that "current regulations, introduced 20+ years ago, do not permit foods like almonds, avocados or salmon from using the term 'healthy' as a nutrient content claim because of these foods’ inherent dietary fat content, despite being recommended for increased consumption in federal Dietary Guidelines and by leading health and nutrition experts."

Given that much of Kind's success is due to positioning its snacks as nutritious, as well as tasty, the ability to use the term "healthy" is crucial to the company.

In the petition, Kind asks the FDA to change the general nutrition claims language to allow food makers to qualify to use "healthy" by excluding the grams of saturated and total fat content in their products that come from nuts, fruits, vegetables, seeds, whole grains and legumes (as long as the nutrition in such ingredients hasn't been degraded by over-processing).

The FDA, which launched its Nutrition Facts revision effort in July 2003, finally issued a proposed rule in March 2014. Among other changes, that rule actually already proposes that the per-serving breakouts for "calories from fat" and "calories from saturated fat" be eliminated from the label. However, breakouts showing the amounts of total fat and total saturated fat would remain mandatory.

Just weeks ago, the FDA unexpectedly announced that as of Nov. 12, it would begin taking public comments on use of the term "natural" in labeling claims.

And days later, Democratic lawmakers introduced a new version of the "Food Labeling Modernization Act"  (the original one was introduced in 2013).

This proposed regulation would direct the Secretary for the Department of Health and Human Services to create a standard front-of-package label that would, among many changes, require breaking out "added" sugar content. HHS would also be directed to define terms including "natural" and "healthy."