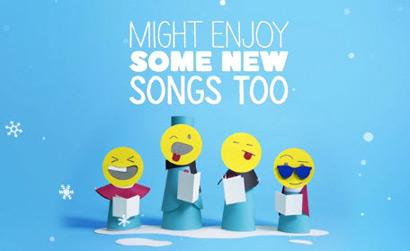 A launch video that's now live on Oreo's YouTube channel (also see below) uses the "Wonderfilled" tune, with new lyrics, to encourage fans to start posting stories, memories and thoughts on social channels about what the holidays mean to them, using the hashtags #WonderCarols and #Promotion.

Each week between Dec.7 and 23, Oreo and The Martin Agency will use some of the posts as inspirations to create two to three original, animated holiday song videos (similar in style to the launch video).

The idea, as explained in the video, is to supplement the cannon of traditional carols with a "holiday soundtrack for modern life" that captures "the joyous, reflective, ridiculous and maybe even likably cranky moments of the season" as expressed in the posts, Oreo tells Marketing Daily.

The brand will release each song video on its Facebook, Twitter and YouTube  channels, along with a note to the fan who inspired the song. Paid digital advertising is being used to support the social campaign.

Oreo kicked off its overall holiday campaign on Nov. 17 with a new television spot, "Wonder What's Inside the Holidays." The TV ad, which  shows Christmas tree ornaments singing questions to the Wonderfilled tune, has pulled more than 6,000 views on Oreo's YouTube channel since being posted there on Nov. 23.

In addition, as reported here previously, for the first time this season, Oreo's e-commerce site is offering fans the ability to create customized Oreo "Colorfilled" package wraps by choosing holiday-motif graphics, colors and messages and including a personalized note for the recipient.