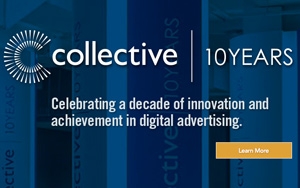 Collective has split operations into two units: tech and media services, the report from AdExchanger said. The layoffs are part of a 20% spending cut on the media side, the report said, adding that no employees below the CEO will "support both media services and tech" under the restructuring.

The news comes on the heels of PubMatic and Turn’s announcements that both global companies will be conducting layoffs and making a change in structure.

What do all these employee cuts mean? It could be industry consolidation, a response to a fast-growth mentality in tech or a number of other things. (Get Real-Time Daily’s perspective here.)

Turn said it laid off 57 of 400 employees to refocus on strengths and dial down on SaaS services.

PubMatic cut 100 employees in order to double down on the minority of customers who represent 90% of the company’s revenue, the company’s CEO told AdExchanger.

Founded in 2005, Collective is headquartered in New York, with sales offices in the U.S., London, U.K., and Bangalore, India. The company announced an ad-buying platform called VISTO in May, which it called a “fully transparent, self-service interface” in a release, as well as a partnership with media firm Allscope Media to help “scale campaigns for [Collective’s] clients across multiple channels.”

At press time, Collective had not responded to requests for a comment.