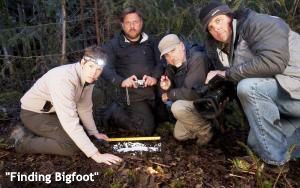 Let me go out on a limb here and guess that the experts seen in the History Channel series called “Hunting Hitler” will never find the proof they seek that Adolf Hitler escaped from Berlin at the end of World War II and found sanctuary in Argentina.

By the same token, I don't expect that the protagonists in Animal Planet's “Finding Bigfoot” will ever find Bigfoot. And if they do, I doubt he will even answer to that name. That's someone else's creation, not his. My advice to the Bigfoot searchers: It’s probably unwise to shout, “Hey, Bigfoot!” when you finally lay eyes on him. Try and contain your excitement. He -- or it -- might be sensitive about his big feet.

Suffice it to say that Bigfoot remains elusive to the Bigfoot hunters on “Finding Bigfoot,” who have been searching for him on this show since 2011. They are starting a new season of Bigfoot searches, starting Jan. 10, that will take the team -- pictured above examining a footprint in the woods somewhere -- to Maine, New Hampshire, Georgia and Oregon.

This begs the question: If Bigfoot specimens (known in the trade as sasquatches) range so widely, then why hasn't anyone ever seen one for long enough to snap a clear photo, particularly in the present day, when we all have very advanced smartphones capable of taking terrific pictures in seconds?

In a way, not finding Bigfoot is really what propels a show like this. If a sasquatch was to actually be found, then that particular episode would be one for the history books, but the series would be over. So the search for Bigfoot continues.