This Again? Trump And Others Line Up For Fifth GOP Debate 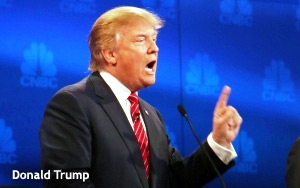 Welcome, my friends, to the show that never ends.

It’s the Republican presidential campaign, starring Donald Trump with a cast of others. For the fifth time since August, Trump and the rest of the GOP supporting players will be locked in heated debate Tuesday night on CNN starting at 8:30 Eastern, live from The Venetian in fabulous Las Vegas. Your host and moderator: Wolf Blitzer.

CNN is billing this contest as the last one of 2015, which isn’t really all that notable since the next one is scheduled for barely a month later --  Jan. 14 on Fox Business Network. At least seven Republican debates are scheduled so far just through March of next year (including the Jan. 14 “season opener”), which means these GOP debates -- which were among the top television highlights of 2015 -- will loom even larger next year.

That’s fitting, of course, since 2016 is the actual election year. In this context, the 2015 debates, which drew so much attention and viewership, were just prelims. However, if they taught the TV business anything, it’s that these debates are surefire ratings winners, particularly for the cable news channels that have been airing them -- CNN, Fox News Channel, Fox Business, CNBC.

And so, the debates continue, driven by a narrative in which Trump is the star, even though his performance at most of them has been overshadowed by others. It’s what he says and does between the debates, though, that generates the most hype as viewers tune in to see if he’ll say anything controversial.

For example, Tuesday night’s debate is the first one since Trump suggested that all Muslims who are not already here be barred from entering the United States. So this will undoubtedly come up in a question from Wolf Blitzer and then be debated by Trump and the debate’s eight other participants.

You could argue that there’s little reason for viewers to tune in to watch Trump in these debates since he is interviewed elsewhere on TV almost every day. On the Muslim immigration question in particular, Trump has been addressing it (and sticking to it) almost daily since he first floated his Muslim-ban idea.

In fact, I even read suggestions from some in the past week or so that the news media should stop paying so much attention to Trump. They invite him on too much, these people gripe about the "media" -- presumably referring mainly to the network morning shows and cable-news talk shows that have Trump on all the time. By making all of this exposure possible, the news media is complicit in Trump’s efforts to build support for his campaign, these people say.

They’re not wrong, in a sense. It’s true that for Trump, the incessant exposure has been a boon to his popularity. It’s a "frequency" play: Trump is on TV so much explaining himself and his proposals and ideas that the sheer weight of his presence seems to blunt all the criticism that follows his latest controversial statements (such as the Muslim immigration ban, for instance).

On the other hand, you would think that he’d get himself in even more trouble by speaking out so often. But with Trump, the opposite occurs. Every time he generates a tsunami of negative reactions to what he says, his base stays strong and sometimes even increases.

The fact is, anyone who would suggest that the news media voluntarily declare a moratorium on Trump doesn’t understand the news business. This complaint arises relatively often -- every time there are news stories that are covered so much by all of the news media at once that some people express frustration about it. But as I have written many times before, you can hardly expect competitive news media to drop a story everyone else is covering just because someone is complaining they’re tired of it. That’s just not how the news media works.

So, until Trump’s appearances on morning shows and prime-time debates start to repel viewership rather than attract it, the Trump show will go on, and the others will struggle to even to get their names mentioned in opinion columns and blog posts.

politics, tv
1 comment about "This Again? Trump And Others Line Up For Fifth GOP Debate".
Check to receive email when comments are posted.
Next story loading