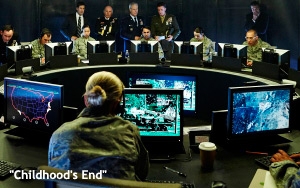 In his novel Childhood’s End, science fiction author Arthur C. Clarke predicted that in the future, entertainment choices would "pour" out of multiple channels and the evolution of motion pictures would lead to virtual-reality technology. The book was published in 1953.

He complained about the former, but was "dazzled" by the latter. He described both phenomena decades before they would ever become possible. The Syfy channel recently provided a copy of the book as part of its publicity efforts for the three-part "Childhood’s End" miniseries that concludes Wednesday (Dec. 16) at 8-10 p.m. Eastern.

The book is about the conquest of Earth by a race of very advanced extraterrestrials. They are so advanced, both technologically and intellectually, that the takeover is surprisingly non-violent as the people of the planet Earth quickly realize that resistance is futile.

The reign of these outer-space Overlords turns out to be non-violent too. Their rule turns out to be so benign that their presence ushers in an era of unprecedented peace and prosperity on Earth. One result is an explosion in leisure time and leisure activities such as the consumption of filmed entertainment.

This doesn’t sit well with one character in the novel, however. “The world’s now placid, featureless, and culturally dead,” says the character, George Greggson, a stage director who lives in a colony of artists who are trying to restore mankind’s interest in art and culture.

“Nothing really new has been created since the Overlords came,” he says in a soliloquy. “The reason’s obvious. There’s nothing left to struggle for, and there are too many distractions and entertainments. Do you realize that every day [italics are Clarke’s] something like five hundred hours of radio and TV pour out over the various channels? If you went without sleep and did nothing else, you could follow less than a twentieth of the entertainment that’s available at the turn of a switch!

“No wonder that people are becoming passive sponges -- absorbing but never creating,” he says. “Did you know that the average [italics are Clarke’s again] viewing time per person is now three hours a day? Soon people won’t be living their own lives any more.”

Tell me about it.

A few pages later, Clarke describes the development of a technology he calls “total identification,” but it sounds like virtual reality. The pursuit of this new technology is being undertaken by a team of artists and scientists who also reside in this same colony.

“The group of artists and scientists that had so far done least was the one that had attracted the greatest interest -- and the greatest alarm,” writes Clarke in this section of the book. “This was the team working on 'total identification.'

“The history of the cinema gave the clue to their actions,” he writes. “First sound, then color, then stereoscopy, then Cinerama, had made the old ‘moving pictures’ more and more like reality itself. Where was the end of the story? Surely, the final stage would be reached when the audience forgot it was an audience, and became part of the action.

“To achieve this would involve stimulation of all the senses, and perhaps hypnosis as well, but many believe it to be practical. When the goal was attained, there would be an enormous enrichment of human experience. A man could become -- for a while, at least --  any other person, and could take part in any conceivable adventure, real or imaginary. He could even be a plant or an animal, if it proved possible to capture and record the sense impressions of other living creatures. And when the 'program' was over, he would have acquired a memory as vivid as any experience in his actual life -- indeed, indistinguishable from reality itself.

“The prospect was dazzling,” Clarke writes. “Many also found it terrifying, and hoped that the enterprise would fail. But they knew in their hearts that once science had declared a thing possible, there was no escape from its eventual realization.”

That’s really true, isn’t it? Some people decried the rise of the Internet, for example, and the way it would change everything. Years ago, I wrote more than one column in which I was only half-joking when I described the Internet as “just a fad -- like yo-yos or CB radios” -- something that would be popular for a time and then fade. But I knew in my heart -- like the people Clarke references in “Childhood’s End” -- that the march of progress is inexorable.