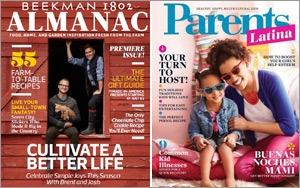 The number of new magazine launches decreased 41% from 190 in 2014 to 113 in 2015, according to the latest figures from MediaFinder, which maintains a database of U.S. and Canadian publications.

The year’s most prominent launches included Meredith Corp.’s Beekman 1802 Almanac and Parents Latina; Nickelodeon, reviving a kid’s title which closed back in 2009; Bauer’s Simple Grace, targeting Christian readers; TEN’s new Roadkill magazine, based on the popular Web series of the same name; The Escapist, a travel and business title from the publisher of Monocle; and Lonely Planet, a new quarterly from the travel publisher.