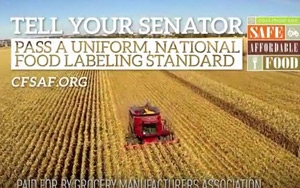 The food industry's Coalition for Safe Affordable Food (CFSAF) failed to get its bill that would block states from mandating GMO labeling attached to the omnibus spending bill that Congress hammered out late on Dec. 15.

In addition, the spending bill — now expected to go up for a vote on Dec. 18, before Congress adjourns for the holidays — includes a provision that would block sales of GMO salmon until the Food and Drug Administration publishes final rules about how consumers should be informed about GMO content.

CFSAF, whose members include the Grocery Manufacturers Association (GMA), American Beverage Association, National Restaurant Association and agricultural organizations, had in recent weeks intensified its already heavy lobbying in an effort to get its "Safe and Accurate Food Labeling Act" attached as a rider to the spending bill.

Among other efforts, GMA has recently been running a TV ad (shown above) in the Washington, D.C. market urging viewers to tell their representatives in Congress to pass the act.

The House passed that act — which would make GMO labeling disclosures voluntary — in July, but the bill stalled in the Senate.

The timing is considered critical by the food industry because the first state law mandating GMO disclosure on labels, passed by Vermont, is set to go into effect next summer. That would also trigger implementation of similar mandatory GMO labeling laws that have been passed in other states.

Regarding the spending bill, Pamela G. Bailey, president and CEO of GMA, issued a statement saying in part: "It is unfortunate that Congress has failed to take action this year to stop a patchwork of costly and misleading state labeling mandates, an issue of tremendous importance to consumers, farmers, food and beverage companies. In January, food manufacturers will face exponentially increasing costs totaling hundreds of millions of dollars to comply with Vermont's GMO labeling mandate." CFSAF is now urging Congress to "work to find agreement and pass legislation to address this issue immediately when they return in January," she added.

The Environmental Working Group (EWG), which also intensified its lobbying efforts to prevent the inclusion of the food industry's proposed provision in the spending bill, issued its own statement.

“We applaud Congressional leaders for rejecting efforts to block state GMO labeling laws in the omnibus,” said Colin O’Neil, EWG’s director of agricultural policy. “An end-of-the-year, must-pass spending bill is the wrong vehicle to address an issue as important as our right to know what’s in our food and how it’s grown."

He added: "We need a national, mandatory GMO disclosure system that works for consumers but does not stigmatize GMOs. Americans simply want the right to know what’s in our food -- just like consumers in 64 other nations."

The omnibus spending bill as it stands also includes several other provisions of importance to the food industry and consumers.

It would allocate $21.75 billion in discretionary spending for agricultural programs; give the FDA an additional $104.5 million for food safety purposes (double the amounts proposed in previous bills); and provide $1 billion for the U.S. Department of Agriculture's Food Safety and Inspection Service ($3.3 million more than was requested by the President).

It would also repeal the "COOL" regulation that mandates disclosure of country of origin on meat sold in the U.S. The repeal is an effort to head off $1 billion in retaliatory tariffs against U.S. goods that was recently authorized by the World Trade Organization for Canada and Mexico.

The bill includes language that attempts to limit the impact of the 2015 Dietary Guidelines. Michael F. Jacobsen, president of the Center for Science in the Public Interest, says that such efforts mostly reflect the meat industry's concern that the government will urge Americans to eat less red meat.

But the wording of the rider "should have no effect" on the guidelines because it is essentially redundant with what the law already requires, Jacobsen said in a statement.