Coming Next Year, All J. Lo All The Time 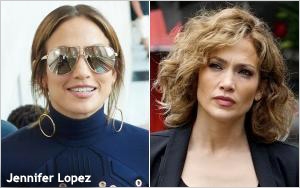 Jenny from the block is about to take up residence on two networks.

It’s a rare thing for a star entertainer to be top-billed on two prime-time TV shows on different networks at the same time. Jennifer Lopez is about to achieve it, however, when she’s seen on “American Idol” on Fox and in a new cop drama on NBC called “Shades of Blue,” starting in January.

That’s her in both of these “roles” in the dual photos accompanying this blog post -- “Shades of Blue” on the right, and Lopez wearing shades on “Idol” on the left.

“Shades of Blue” premieres Thursday, Jan. 7 at 10 p.m. Eastern. Its 10-11 p.m. time slot ensures that it won’t ever go up against “American Idol,” since Fox network programming concludes at 10 o’clock.

Meanwhile, “American Idol XV” premieres the night before, on Wednesday, Jan. 6 -- running from 8 to 10 Eastern. As long-time “Idol” watchers know, the first few weeks of “Idol” consist of two audition shows per week that are often two hours long.

For the first couple of weeks at least, the second of these weekly two-hour shows will be airing Thursday nights on Fox from 8 to 10 -- which means J. Lo will be on TV for the entire three hours of network prime time on those evenings. The “American Idol” schedule goes through various shifts as the season proceeds, but the show will have a major presence on Thursday nights from January to May and so will Jennifer Lopez.

On “Idol,” of course, J. Lo is a judge, along with Harry Connick Jr. and Keith Urban. This year’s “Idol” is the series’ last, and it’s being billed as “The Farewell Season.” Sentiment might give the show a boost in the ratings as viewers tune in to see who will be the final “American Idol” winner -- a young man or woman who will then either walk in the footsteps of past winners such as Carrie Underwood, Kelly Clarkson and Fantasia Barrino or fade into relative obscurity as most of the rest of the winners have done.

The success or failure of “Shades of Blue” is a tad more difficult to handicap, although J. Lo’s fans will like it just fine. It’s a gritty, New York-based police drama in which Lopez plays an NYPD detective raising a teenage daughter as a single mom.

Her daughter is something of a gifted goody-two-shoes, an aspiring cellist who attends an expensive private school. By contrast, her mother -- Lopez’s character -- is not a goody-goody, but not quite a baddy-baddy either, at least in her own opinion. She’s a tough cop who’s on the take. But she rationalizes that this “system” is the only way to keep peace on the streets. And besides, how is she supposed to afford the tuition for her daughter’s private school on a police detective’s salary?

The way the payoff system works is this: She and her cohorts -- led by a veteran detective played by Ray Liotta -- extract payments from local lowlifes in return for police protection against other lowlifes who might seek to make inroads on their turf. Among other things, this system ensures that drugs aren’t peddled in schoolyards and hookers don’t solicit johns near schools and churches.

As cop shows go, “Shades of Blue” is a very good one. J. Lo herself is appropriately unglamorous in the show, which helps make her performance as this police detective a successful one. She’s aided greatly by the presence of Ray Liotta, who shares many scenes with her. He’s sensational, and you can’t take your eyes off of him.

NBC has already made eight episodes of “Shades of Blue” available to TV columnists, which means this show’s production schedule won’t likely conflict with Lopez’s commitment to “American Idol.”

Here’s a fun fact: By my calculations, Jennifer Lopez’s presence on network TV will amount to just north of 6 percent of all prime-time hours on the four networks. If there are 81 hours of prime time every week on ABC, CBS, NBC and Fox, and J. Lo is on five of them, then that’s how I arrived at that percentage.

Clearly, 46 year-old Jennifer Lopez is in her prime -- prime time, that is!