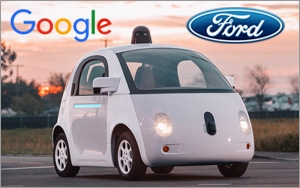 Google seems to have found a partner to manufacture its self-driving vehicles. Ford reportedly will announce a joint venture with Google at an industry event in January. It's not a farfetched idea -- Google has the technology and robotics capabilities, and Ford has the mechanical engineering background and supply chain knowledge. Together they could build and run the manufacturing facility of the future through automation with support from customer data.

Pairing Ford with Google eliminates the need for the latter to spend billions of dollars and several years building its own automotive manufacturing infrastructure that the project will require. Google co-founder Sergey Brin told the press during an event in September at the company's Mountain View, California headquarters that the company would look for original equipment manufacturer (OEM) partners to team up with and bring the technology to market.

John Krafcik, who took the help of Google's self-driving car project in September, will give his first public address as CEO of the project at the Automotive News World Congress Tuesday, Jan. 12. Google executives have signaled that it intends to introduce self-driving cars by 2020, and have been providing updates on the progress of its test fleets in Mountain View, California and Austin, Texas.

In fact, Krafcik worked at New United Motor Manufacturing Inc. (NUMMI), a car plant in Fremont, California, the year it opened in 1984 in quality and manufacturing engineering. The joint venture between General Motors and Toyota aimed to teach GM how to make higher-quality cars at a much lower cost.

In this case, Google could teach Ford about Internet connectivity for cars, including ways to better learn the car owner's preferences "to provide more relevant" services. Ford would teach Google about the electronic supply chain, connecting auto-replenishment tools with enterprise resource planning systems, and how to manufacture cars. Together they could build and run the manufacturing facility of the future through automation with support from customer data.

The joint venture could help Google clear some hurdles, such as the one in California. A set of draft rules from the Department of Motor Vehicles released last week Wednesday would slow access to self-driving cars without a driver until regulators are confident the technology is safe.

The D.M.V. proposal would mandate a licensed driver to operate autonomous vehicles. That driver would take over if necessary and become responsible for traffic violations.

Reports also suggest that Ford's deal with Google will not be exclusive, and that the Mountain View, Calif., tech company has been discussing its technology with multiple automakers, including Volvo, Mercedes, and Nissan, all of which have also been actively developing a form of autonomous vehicle technologies.

Google could turn the cars into moving billboards by plastering the company's name on the side of the car similar to Amazon's latest move when it bought fleet of semitrailers to support a budding logistics business.

Google may have the technology, but Ford has the backing and support from organization like Automotive Industry Action Group (AIAG), and The Auto Alliance. I should also mention the National Institute of Standards and Technology (NIST).

If consumers and government are warming up to to the idea of automation, it hasn't always been that way. AIAG reports that in 2012 Google set out to lobby state and federal government in an effort to influence pending legislation. The company spent more than $14 million on various company campaigns in 2013, the most of any high-tech company in the U.S.