Nothing Golden About This TV Era: This Year's Worst Shows 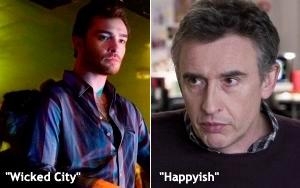 I have nothing against critics coming out in praise of great TV shows. I’ve done it myself on occasion. But the blanket labeling of the current TV era (what has it been? 10 years? 15?) as a new “Golden Age” is ludicrous. Even the original “Golden Age” -- the 1950s -- wasn’t so golden.

All you have to do is go back and take a look at the full breadth of TV shows that aired in TV’s first real decade and you’ll realize that most of TV -- then as now -- should not be considered golden by anyone.

That’s not to condemn TV, however. When you’re a TV fan, or even a TV columnist, you take the good with the bad because -- hey, that’s television.

Here then, is a rundown of the Worst Shows of 2015 because -- let’s face it -- like every other year in the history of television, the medium still manages to produce plenty of duds.

Readers of this blog over the past year will not be surprised to find ABC’s “Wicked City” -- about a serial killer on the Sunset Strip in 1982 -- and Showtime’s “Happyish” -- about the contemporary advertising business -- at the top of this roundup of the year’s worst shows.

What did these two shows have in common? Just this: In a TV era in which it seems as if “anything goes” with regard to the Big Three categories of questionable content -- sex, violence and profanity -- these two shows seemed to push the limit on at least two of them.

In “Wicked City,” the violence was ugly and gratuitous. The same can be said of the language in “Happyish,” in which the f-word was used frequently but so unnecessarily that you wanted to watch this show with an index finger comically inserted in each ear.

If these shows proved anything, it’s that yes -- viewers can be offended these days. Imagine that.

Speaking of being offended, in the two blog posts I wrote about Donny Deutsch’s new sitcom “Donny!” on USA Network, I focused, at least in part, on the tasteless focal point of the show’s second episode -- which was (drumroll, please) the un-groomed quality of Donny’s pubic hair. Needless to say, on the basis of this episode alone, “Donny!” was one of the year’s worst shows.

Whenever I write about these kinds of plot points, I usually feel I’m out there alone among the community of TV critics. But to my surprise, I wasn’t alone this time as critic after critic zeroed in on this topic and condemned the show for it. It’s another example of TV pushing the envelope of good taste and finding -- surprise, surprise -- that it’s possible to exceed the limits of what people will accept.

What else fared badly this year? Critics welcomed this year’s edition of “American Horror Story” -- subtitled “Hotel” -- but to me, it was the same gratuitous (there’s that word again) violence that this series has always trafficked in.

In addition, this “Horror” show featured what might have been be the year’s worst performance anywhere on TV -- Lady Gaga as “the countess.” Naturally, she has been nominated for a Golden Globe -- another reason to consider the Golden Globes as the most ridiculous awards show on Earth.

FX blundered with “The Bastard Executioner,” a drama about a guy in the Middle Ages who tortures and executes people for a living, but was nevertheless remorseful (I think). Talk about a Middle Ages crisis! The show was canceled after one season -- a rarity for FX.

One thing notable about a number of the year’s other misses: They were all on NBC, which had a good year in spite of them. These included several “limited” series -- “Aquarius,” the miniseries about a young Charlie Manson done up as a handsome hipster; and “The Slap,” about the unraveling of a group of friends after one of them slaps another one’s brat across the face -- punishment this kid richly deserved. These were shows that didn’t live up to all the pre-launch hype -- a common occurrence in television, if not show business in general.

NBC’s comedies were run-of-the-mill too -- “Truth Be Told,” “Telenovela” (which had a “preview” this month and “premieres” next month) and “One Big Happy,” to name just three of TV’s dud comedies in 2015.

In my review of “Truth Be Told,” I coined a new phrase, “blanding together,” meant to describe the effect of watching network sitcoms these days. Which is to say: With only the occasional exception, the TV comedies of 2015 all looked alike to me.

tv
2 comments about "Nothing Golden About This TV Era: This Year's Worst Shows".
Check to receive email when comments are posted.
Read more comments >
Next story loading