Google's Search Home Page Became A Message Board In 2015 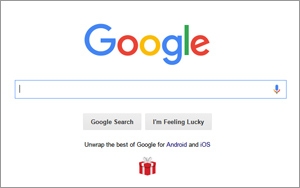 This year Google's home page became the perfect pitch page for its hardware. Sometimes the Mountain View, California company took advantage of its home page to promote what it deems to be important causes. On Sunday, in the midst of rolling out technology that allows searchers to stream some apps on their mobile device to try before they download, Google's home page became a space to advertise the "best of Google for Android and iOS."

The prime real estate spot has become a space to show off its wares. This time the message lands beneath a wrapped present icon that links to Google apps in its Google PlayStore and the Apple App Store.

It's not unusual for Google to promote its hardware or initiatives its executives deem important. For instance, Google turned its search engine home page in November into a promotion to raise aware for a project spearheaded by StoryCorps, an independently funded nonprofit with a mission to record and preserve stories of people's lives in the cloud.

Aside from directing searchers to download apps, this time the unusual detail of the promotional home page message points to the Apple App Store. Google recently introduced a feature where searchers can stream apps in google.com queries without having to download the app onto the smartphone or other devices.

This message promotes Google apps running on iOS devices such as iPad, iPhone and Macs in an effort to woo Apple users to YouTube, Google search, Google Maps, Google Earth, among others.

Google also used google.com to introduce Nexus, and Chromebook. In 2010, the search engine experimented with an image of a lake that meets the base of red majestic mountains, some hidden by clouds that turned into an REI ad.

Bing's home page also became somewhat of a message board, but the search engine did so a little more covertly by linking to national parks or places of interest through iconic images.