Farewell To Spock: Remembering The Legends We Lost In 2015 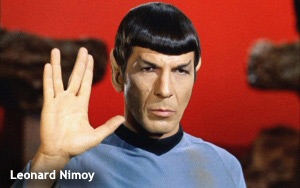 Somehow, they were bigger then, or at least that’s the way we remember them.

They were the stars of TV past, the ones who came into our homes in the era before cable and the Internet caused audiences to fragment into little bits and basically blew the TV business all to hell (never mind that it’s still a multibillion-dollar industry).

According to the actuarial tables, the deaths of TV greats from the 1950s and ’60s are inevitable, of course. So in 2015 we lost a number of them, perhaps none more iconic than Mr. Spock -- Leonard Nimoy. He lived long and prospered until his death at age 83. We will never forget his passive expression, arched eyebrow, pointed ears and split-fingered greeting.

We also lost one of the four principal stars of one of the highest-rated shows in the history of television -- Donna Douglas, who played the exuberant Elly May Clampett on “The Beverly Hillbillies.” She was 82. Is there anyone on Earth who has never seen her?

And did anyone ever look more dapper in a derby than Patrick Macnee in “The Avengers”? Macnee died at age 93.

“Superman” reboots may come and go, but to all of us, Jack Larson will always be Jimmy Olsen. He played the role in the 1950s “Superman” series, and died this year at age 87. TV’s original Batgirl, Yvonne Craig, died at age 78. So did one of the original “Petticoat Junction” stars -- Pat Woodell, the first Bobbie Jo. She was 71. Suzanne Crough, known to a generation as young Tracy Partridge on “The Partridge Family,” also died. She was 52.

For many of us, Martin Milner was the first TV cop we ever knew -- LAPD Officer Pete Malloy on “Adam-12.” Milner was 83 when he died in September. He also starred in “Route 66” and the movie “Sweet Smell of Success.”

Dick Van Patten, TV dad from “Eight is Enough,” died at age 86. I interviewed him in a hotel room in Manhattan in 1991 when he was promoting the series he was appearing in at the time -- “WIOU,” a drama about a fictional TV station in Indiana. He played the station’s long-time weatherman. If memory serves, he was a congenial interview subject. But today I have no idea what he said to me because “WIOU” was cancelled before I had a chance to write up the interview. So no clipping or any other record exists of this conversation. Alas.

Gary Owens was best known as the “beautiful downtown Burbank” announcer on “Rowan & Martin’s Laugh-In.” But for decades, he was a fixture of L.A. radio whose voice was also heard on countless cartoons and radio commercials. It was my privilege to know him, and to carry on a correspondence with him that lasted more than 25 years. He had an offbeat sense of humor –- signing off his letters with nonsense words of his own invention like this: “Best krelbs, Gary Owens.” He died this year at age 80. So long and best krelbs to you, Gary.

Judy Carne was known to one and all who lived during the “Laugh-In” era as the show’s “sock-it-to-me girl.” She died this year at age 76. Another actress with a nickname, Catherine Coulson -- the “log lady” of “Twin Peaks” -- died in October at age 71.

We lost two actors who appeared in “The Sopranos” -- Robert Loggia, 85, who played old-school gangster Feech La Manna, and Frank Albanese, 84, who played Tony Soprano’s Uncle Pat and who was so memorable in the show’s final episode. Loggia was a fixture of TV and movies for more than 50 years (including “Big” and “Scarface”).

Frank Gifford died this year. He was 84. Wrestler “Rowdy” Roddy Piper was 61 when he died last July. Alex Rocco died this year at age 79. He was best known as Moe Greene in “The Godfather,” but fans of “The Simpsons” knew him as the voice of the tough-talking cartoon tycoon Roger Meyers Jr.

Sam Simon, one of the co-creators of “The Simpsons,” died at age 59. Another producer, Bud Yorkin, died at age 89. Yorkin’s name was familiar to anyone who watched TV throughout the 1970s. You’d see his name on countless TV shows, among them the most famous in the history of TV -- “All in the Family,” “Maude,” “Good Times” and “Sanford and Son.”

Dickie Moore was a child actor in “Our Gang” comedies before going into the publicity business in his adulthood. He was Dick Moore then, and one of his publicity clients was the Writers Guild of America. When reporting stories about labor strife in the TV business, mostly in the 1980s, I used to talk to him about the WGA. But he didn’t mind fielding my curious questions about his life as a child actor, even though the subject was not relevant to our discussions about labor issues. Dick Moore died this year at age 89.

And then there was Joe Franklin, but that’s a whole ’nother story http://www.mediapost.com/publications/article/264785/remembering-a-legend-we-lost-in-2015-joe-franklin.html.

tv
2 comments about "Farewell To Spock: Remembering The Legends We Lost In 2015".
Check to receive email when comments are posted.
Read more comments >
Next story loading