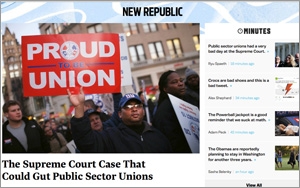 After four troubled years, Facebook cofounder Chris Hughes is throwing in the towel and putting The New Republic up for sale. He admits he underestimated the challenges facing legacy print publications as they attempt to reinvent themselves for the digital media age.

In a letter to staff which he also posted on Medium, Hughes wrote: “I bought this company nearly four years ago to ensure its survival and give it the financial runway to experiment with new business models in a time of immense change in media. After investing a great deal of time, energy and over $20 million, I have come to the conclusion that it is time for new leadership and vision at The New Republic.”

He went on: “I will be the first to admit that when I took on this challenge nearly four years ago, I underestimated the difficulty of transitioning an old and traditional institution into a digital media company in today’s quickly evolving climate.”

The move comes a little over a year after most of the venerable liberal magazine’s top editors left en masse, led by Franklin Foer and Leon Wieseltier, in protest over Hughes’ plans for it. However, Hughes went out of his way to deny that their departure was a contributing factor in its failure to settle on a sustainable business model.

“Our disagreement didn’t help our ability to make The New Republic viable today, but it also did not spell our demise… Even though our search for a workable business model has come up short, we have shown that digital journalism isn’t at odds with quality and depth,” he noted.

Although he repeatedly took responsibility for his inability to find a business model that works, Hughes noted that there are signs for hope: “The unanswered question for The New Republic remains: Can it find a sustainable business model that will power its journalism in the decades to come? There are bright signs on the horizon: Vox, Vice, the Texas Tribune, BuzzFeed, ProPublica, and Mic embody a new generation of promising organizations — some for-profit, others nonprofit — that have put serious, high-quality journalism at the core of their identities.

"The New York Times, The Atlantic and other traditional outlets seem to have found business models that work for them. I hope that this institution will one day be part of that list. To get there, The New Republic needs a new vision that only a new owner can bring.”