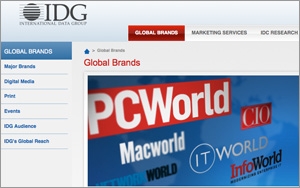 IDG Corp., the Boston-based, tech-publishing company that owns media brands like PCWorld and InfoWorld, is considering selling the company. IDG has enlisted the help of investment bank Goldman Sachs to explore their options.

Media industry adviser Peter Kreisky told the Boston Herald that he expects IDG could sell for more than $7 billion. Kreisky, the chairman of Kreisky Media Consultancy in New York, said that “big players” would find the company “very attractive.”

Nikkei already has a licensing partnership with IDG and just bought the Financial Times from Pearson last summer for $1.3 billion.

“In response to certain operating requirements of the foundation, IDG’s board of directors has retained Goldman Sachs to map out the company’s strategic options” spokesman Josh London told the Boston Herald. “Our goal is to determine the optimal future balance between what’s best for IDG and Pat McGovern’s mission for the foundation.”

The announcement by the publisher and producer of conferences like Demo and MacWorld comes nearly two years after the death of IDG founder and chairman Patrick McGovern.

At the time, IDG was the 112th-largest private U.S. company with an estimated $3.8 billion in revenue. After McGovern’s death, ownership of IDG was transferred to the McGovern estate for the benefit of the McGovern Foundation, which focuses on neuroscience and IT.

One source told Folio that the company is “very serious” about a sale. Another told the publication that the process of a sale has just begun and bids are still another three to six months away.

Sources also told Folio that the estate prefers to sell the company as a unit; breaking up the different divisions would require a lengthy sales process.

Insiders told Fortune they’ve been told of four possible scenarios: a sale to a third party, a management buyout, an investment by venture capital firms or nothing.

McGovern started IDG in 1964 and launched Computerworld, its first publication, in 1967. IDG has grown worldwide to 460 Web sites, 200 mobile sites and apps and 179 print titles. It produces 700-plus events in 67 countries and employs more than 13,000 people worldwide.

In 2014, IDG shuttered the print edition of Macworld and turned it into a digital-only brand. Its last print magazine, CIO, was shut down last October and went digital only. However, the company still maintains print magazines in several international markets.
computers, m&a, magazines, print, technology
Next story loading