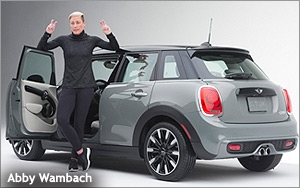 Mini recently revealed that it would advertise in the Super Bowl, for the first time since 2011. On Jan. 18, the automaker kicks off the digital teaser campaign leading up to that 30-second spot, which features Serena Williams, Abby Wambach, Randy Johnson, T-Pain, Tony Hawk and Harvey Keitel.

The ad is the keystone in a campaign via Butler, Shine, Stern & Partners, called “Defy Labels.” The spot will run in the third quarter of the 50th anniversary game.

The idea of the spot is that, like Mini, the celebrities, actors and athletes featured have had to overcome the labels applied to them. Tom Noble, head of Mini brand communications, tells Marketing Daily that the campaign’s key message is that Mini is not what you think it is, and its vehicle lineup, and premium features prove it.

The campaign shows the celebrities in ways one isn’t used to seeing them, each with different Mini models, punctuated by the all-new Clubman. “The perception for a lot of people is that Mini means a ‘too-small, two-door hatch.’ Not at the right level for a young executive,” says Noble. “Once you have driven one, the labels disappear. So the concept is around defying labels, how Mini defies labels.” Noble says the campaign includes a landing page, which will host the video content, including documentary style videos of each celebrity. And it will be rolled out in Facebook, Instagram, Twitter, YouTube.

Noble says the people featured in the campaign, including one person who is a Mini owner but not a celebrity, were chosen based on two filters. “One is are they are people who have labels they have had to overcome, like Tony Hawk — there aren’t many skateboarders over 40; and do they have, or have they had a relationship with Mini through ownership or driving. They have all driven a Mini in the past, and about half are owners.”

The digital teaser videos kick off with Wambach and William, per Noble, who says the clips comprise unscripted, and free flowing interviews. “These aren’t typical celebrity spots.”

He says the campaign, directed by Christian Weber at Park Pictures, will run for three to six months, with more assets to come. “There will be more traditional car advertising that will communicate craftsmanship — that Mini vehicles are made in England, for example.” He says messaging will include a focus on interior features, as well, such as available Chester diamond-patterned leather seats, and other upscale options.