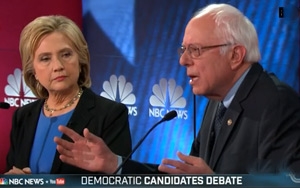 "Who will become the next U.S. president" was not the most-searched question on google.com during the fourth televised Democratic debate that took place in Charleston, South Carolina, Sunday night. Search queries were not dominated by one particular question. Depending on the candidate, the tone took on a negative or positive stance, reflecting the sentiment of voters.

While questions about Hillary Clinton led among Democratic nominees in 12 states on google.com, Bernie Sanders took the remaining states. Broken down into counties across the country shows a speckled mess of inquisitive of potential voters.

For Sanders, the top question demonstrates a more positive tone and a possibility that he could become the Democratic candidate. "Why is Bernie Sanders so popular?" followed by "Can Bernie Sanders win?" and "How old is Presidential candidate Bernie Sanders?"

Searches on Bernie Sanders had the highest spikes during the debate, representing the most searches at any given time -- at 6:05 P.M., just a few minutes after the debate began during his opening statements, and 6:23 P.M.

The top issues searched on during the debate focused on taxes, education, ISIS, minimum wage, and ObamaCare.