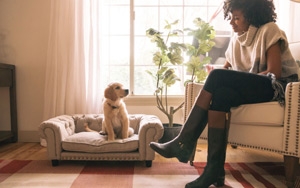 As America’s love affair with wall sconces, scatter rugs and bohemian throw pillows intensifies, Wayfair is launching a new ad campaign. Themed “Explore the Great Indoors,” the e-commerce decorating powerhouse says it is intended to encourage people to break any decorating rules they like.

“A lot of us are home enthusiasts,” says Nancy Go, VP of brand marketing for the e-commerce company. “But part of the fun of our brand is that a lot of people aren’t that into it, and this campaign is for them. We wanted to say ‘You can do anything you want, driven by your imagination.’ We bring that kind of democratic view of design aesthetic.” The spots, here and here, reassure viewers that “there are no style police,” and emphasize its ability to help people find solutions.

It's also running a social component, encouraging users to post their own looks, promising to repost those that are most inspirational.

Go tells Marketing Daily that the idea of the campaign, from its in-house Waygency, is to get people thinking about their homes as “a blank canvas.” Ads target women between the ages of 35 and 65, the prime time for buying furnishings. The spots are airing on such national cable networks as HGTV, TLC, A&E, Bravo and TBS, and is also scheduled to run in network programming, including “Blue Bloods,” “48 Hours,” “60 Minutes” and “Amazing Race.”

It’s a good moment for both e-commerce and furniture in general. MasterCard’s Spending Pulse says furniture was the highest growth category in the recent holiday period, up in the double digits. Since its launch, the company has been dogged by critics who say that no matter how much e-commerce grows, people will always be reluctant to buy things like couches online. But in its most recent quarterly results, the company reported a 77% jump in revenue to $545 million, showing that people are warming up to the idea.

“E-commerce only makes up about 7% of the home furnishing market,” she says, “and even if it doubles in some future state, it’s only going to be 15%. But a house has so many items in it. And yes, there are people who will never buy a sofa online, but will buy coffee, console and end tables. But there are also people who are happy to buy a couch online, but would never buy something more decorative, like a wall mirror. We just want to be a healthy part of the home furnishings ecosystem.”