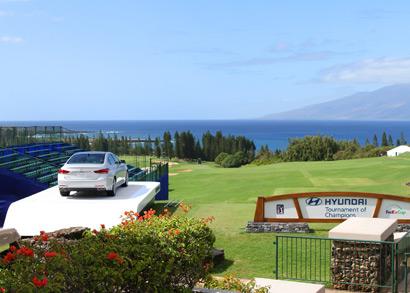 Hyundai, which has been a sponsor of the Tournament of Champions on Maui, Hawaii, since 2011, is leaving the islands and moving its clubs to Los Angeles. The automaker has signed on as the new title sponsor of the PGA Tour’s Los Angeles Open tournament at Riviera Country Club, near its headquarters in Fountain Valley. The deal starts in 2017.

Dave Zuchowski, Hyundai Motor America president and CEO, stated that the PGA Tour’s Los Angeles tournament is “the signature golf event in the country’s second-biggest market,” and is broadcast nationally on CBS. “During the past six years, we’ve continued to expand our relationship with the game of golf and there is no better tournament for us to be associated with.” Hyundai will integrate its “Hyundai Hope On Wheels” charitable program around pediatric cancer into the L.A. tournament.

The automaker last year launched a dedicated golf ad platform including David Feherty as the brand’s first golf ambassador. Feherty, from Ireland, shot three ads that ran on the Golf Channel through the season.

In 2014, Hyundai launched the Hyundai Invitational that put the brand at dozens of charity golf tournaments around the country, which the company activated with sweepstakes and promotions dangling a Hyundai Genesis. Hyundai has also served as the official vehicle of the PGA Tour Humana Challenge and vehicle partner of the Farmers Insurance Open.

The automaker’s sibling brand, Kia, which has its own aspirations to grab the more lucrative premium range of the auto market, moved into golf in 2010. That year the automaker, whose U.S. operation is based in Irvine, Calif., inked simultaneous deals that made Michelle Wie first ever official golf ambassador and spokesperson for Kia, and made Kia a sponsor of the Kia Classic in La Costa Resort and Spa  in Carlsbad, Calif.