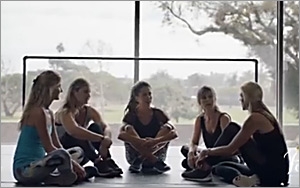 Kimberly-Clark is launching a for its Poise brand, touting Poise Thin Shape pads with Thin Flex technology. The campaign talks about how Poise protects the one in three women who gets occasional Light Bladder Leakage (LBL). The company began that conversation in April, 2014, with a campaign promoting its then-new Poise Microliner product, with suggestive ads that played off of the acronym SAM for Super Absorbent Material.

The new campaign, via the Detroit office of Organic, goes back to a tried-and-true approach: a fitness expert, celebrity, and mom as spokesperson to educate women on LBL. Brooke Burke-Charvet is that person. And she appears in new television, print and online advertisements, free-standing inserts as well as online video shorts on www.poise.com, per the company. Organic handled creative and digital aspects of the campaign.

The company says the campaign also involves digital partnerships (Poise has partnered with Pandora, Linqia, AOL, WildTangent and ShopKick in the past), sampling, retail support and a year-long partnership with Life Time Fitness. The latter includes in-club signage plus sponsorship of and sampling at the company’s national Esprit de She races.

Poise ran a campaign with performance-based influencer marketing network Linqia last year in an effort to get women to stop using menstrual pads for LBL, and switch to the lighter, thinner purpose-designed Poise pads. The #RecycleYourPeriodPad campaign encouraged people to find other uses for pads.