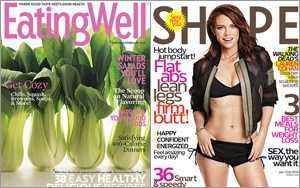 In the first licensing deal, EatingWell is joining forces with Bellisio Foods to create a new healthy frozen food line. It begins with single-serve frozen entrees, but with the possibility of expanding to include multi-serve meals, appetizers, sides, snacks, breakfast foods, dessert and bread.

The recipes will be crafted with input from the editors of EatingWell and will conform with the magazine’s nutritional guidelines for healthy eating.

These agreements expand Meredith’s existing portfolio of licensing relationships, including deals between Better Homes and Gardens and Walmart, Allrecipes and Clipper Corporation, and Realogy and FTD.

For example, Forbes has been in the forefront of the licensing craze, including its recent agreement with Worldfone to launch a new Forbes-branded mobile service, Forbesfone, for people who frequent travelers. Last April, Forbes licensed its name and brand to SocialPort, a system created by rFactr to help companies optimize marketing content across different social platforms, with a focus on social selling in B2B marketplaces.

It also licensed its name for Forbes Digital Commerce, a mobile payments service created and operated by Lotaris, which serves both B2B and B2C industries.