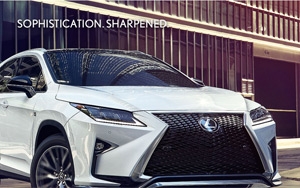 For several years now, Lexus has made its L/Studio a hub for branded lifestyle content, media experimentation, and of course, entertainment, toward tuning in younger buyers. But it has other ways of turning that knob. One new example is a partnership with global streaming radio channel TuneIn.

The automaker is in the midst of a six-week run of “Unbounded Book Club,” a podcast at its “KLRX Powered by Lexus” channel on TuneIn. The deal takes offerings that are usually behind a premium paywall, and serves them for free at KLRX Radio. The program, available via iOS, Android and Windows apps, has well-known artists in various disciplines discussing their favorite books. The RX part of the name refers to the key focus of the campaign, Lexus’ fourth-generation RX crossover.

The series, recorded at TuneIn Studios in Venice Beach, California, comprises 12 podcasts, three artists featured per week. The series launched earlier this month and runs through mid-February, and includes segments with singer songwriter St. Vincent, a frequent collaborator with aural art polymath David Byrne; Death Cab for Cutie frontman and guitarist Ben Gibbard; and actress and former model Hannah Simone. The books they talk about include I Am Malala by Malala Yousafzai, Mysterious Stranger by Mark Twain, and Everything Matters! by Ron Currie Jr. A TuneIn premium subscription is still required to listen to the audiobooks.

Billy Hartman, VP of partnerships at TuneIn, tells Marketing Daily that TuneIn is promoting it with 15-second Instagram video sizzles featuring the artists. In addition to running in TuneIn, the videos were shared back with Lexus, which is using them on its social channels. In addition, Hartman says each of the artists is doing four to six posts with their social networks to drive deeper engagement.

“The goal for us was to take some interesting pieces of content that live behind that paywall and bring it to the free and ad-supported space, so they get access to something they wouldn’t ordinarily get. So it’s a nice opportunity for us to bring new content to listeners and that additional layers. Partnering with artists and musicians for an additional new twist was the compelling piece to the partnership and that’s also one of the reasons Lexus selected us in that program.”

Says Hartman, “Lexus wanted reach a younger ‘hipper’ parent with the new RX. With our studios in L.A., we are doing a lot more with content, so we brought that idea to them — that we could do something enabling listeners to gain access to normally premium content.”

Each of the artists involved selected four books that have impacted them and their careers, per Hartman, who adds that Lexus kept their hand out of the creation process. “It’s not something they wanted to dictate, and some of the books are a bit controversial. But they are going after a different audience; we bring a complementary, additive audience to the streaming space. But it was driven by them wanting to bring something compelling to their listeners … to do something interesting and different.”

TuneIn says it has over 60 million monthly active users, over 100,000 radio stations and more than 5.7 million on-demand programs. A premium subscription gets you NFL, MLB, over 45K audiobooks, and commercial-free music stations. Hartman says TuneIn is a good fit for automotive because its listeners fall into the 25-to-54 bucket, with a median age of 34. “We do skew a bit older than other streaming audio channels, which is great for discussions within the automotive space because they want to reach people who can actually buy a car.”