Trump's Absence Tests Whether Debates Can Thrive Without Him 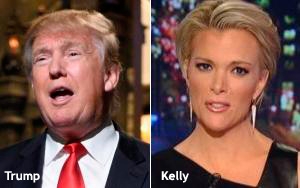 And now the test we’ve all been waiting for (but dreaded it would come): Can these nationally televised (and streamed) Republican debates still draw astronomically high ratings without Donald Trump?

He’s the real draw here. And the effect of his absence on the stellar ratings the news channels have become accustomed to scoring with these debates is the real issue causing consternation for Fox News Channel execs. They’re looking at a debate Thursday night without the star of the show, who decided this week would be a great time to throw a hissy fit over Megyn Kelly. Will the ratings take a nosedive?

Plenty of pundits have already weighed in on what a childish maneuver this is, so there’s little that can be added by saying the same thing here. Fox News Channel and all the other cable news channels, broadcast networks, late-night comedy shows and morning talk shows that depend on appearances by Trump to boost their ratings don’t really care about Trump’s childish behavior anyway, just as long as he does it on TV during one of their debates or shows.

This time, however, Trump won’t be throwing this particular tantrum during Thursday night’s debate (unless he changes his mind later today and tries to get back in) -- which means Fox News won’t benefit from the prospect of Trump going at it with Kelly on live television. So what’s a pugnacious news channel to do? Do they plan a line of questioning that keeps the spotlight on Trump even if he’s not there? Or do they ignore him in favor of other issues?

The guess here is that they will try to do both. Questioning the other candidates about Trump -- perhaps asking them to react directly to his decision to withdraw because mean ol’ Megyn Kelly might ask him tough questions -- would be an obvious and journalistic line of inquiry, since Trump’s decision has made so many headlines this week and he is, of course, the frontrunner.

It would also be irresistible because it would shine the spotlight back on Fox News Channel, positioning it as the news organization that would not cave in to Trump’s demand that Kelly be removed as moderator. And it will elevate Kelly too as the prime-time newswoman who’s so tough she makes candidates for president quake and then avoid a debate where she’s asking the questions.

Questions about Trump will also give his rivals an opportunity to lambast him without having him standing a few feet away rolling his eyes and then blasting them back (although maybe he’ll favor us with some live-tweets during the show). Look for Ted Cruz in particular to address Trump’s absence whether Megyn Kelly (or fellow moderators Bret Baier and Chris Wallace) asks him about Trump or not.

Cruz can even be expected to return to the issue of Trump’s absence again and again, even after the moderators have moved on to other subjects because Cruz is the one candidate who has been most intent on attacking Trump directly (as Trump has attacked him).

Whether Trump dominates the discussion or not, the other candidates are likely glad he’s not going to be around sucking up all the air and the attention even if the viewership takes a hit.

On that subject, whether the ratings will suffer significantly remains an open question. It’s entirely possible that many will tune in to see what the debate will be like without Trump, and what Kelly and the candidates might say about him. However, if Trump decides to stay clear of future debates, that’s when the ratings will really take a dip, and stay there too.

politics, tv
3 comments about "Trump's Absence Tests Whether Debates Can Thrive Without Him ".
Check to receive email when comments are posted.
Read more comments >
Next story loading