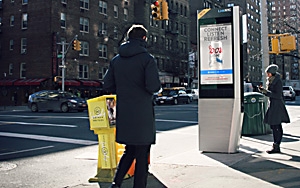 The first 11 LinkNYC kiosks are installed, bringing high-speed WiFi to Third Avenue, beginning at 14 Street and continuing through 45 St.

The 10-foot-tall billboards represent a few different kinds of crossroads: out-of-home (OOH) and mobile advertising; beacons and display; public policy and private sector innovation; LED screens and places in New York other than Times Square. Perhaps one of the most innovative things about the project is that it’s going to pay for itself -- with advertising.

“We don’t think of Links as an advertising platform as the first thing. We think of them as vital services and products that we need everyday, that are funded by advertising,” says Dave Etherington, chief strategy officer at Intersection, the company that manages LinkNYC.

And to inaugurate the new monoliths, MillerCoors and Shazam teamed up to run the first campaign on the kiosks. Those who opt into the network can like songs on Shazam and see them curated into hyper-local real-time playlists in the areas around the kiosks. The playlists are updated every 15 minutes. The campaign is expected to run for about six weeks.

So far it’s too early to tell how many people will opt in to the networks, but as the kiosks become available in neighborhoods all over New York in the coming weeks, the audience is expected to build.

Etherington says that the new ad campaign “unlocks the heartbeat of a specific neighborhood. We saw this as a really powerful way of instantly connecting people to their culture on a micro-geographic scale.”

Aside from the cultural implications, “there’s some really interesting data to be collected and distributed within the platform,” says Scott Varland, creative director at IPG Media, the agency that developed the campaign's concept. The kiosks all know exactly where they are, providing accurate location data, but the data collected will not be sold to third parties.

mobile, wifi
1 comment about "First Ad Campaign On The NYC Link Kiosks".
Check to receive email when comments are posted.
Next story loading