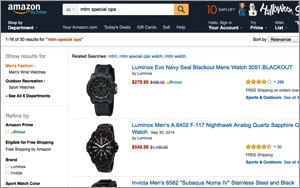 Watch manufacturer Multi-Time Machine is seeking to take its dispute with Amazon over search results to the Supreme Court.

A panel of the 9th Circuit Court of Appeals rejected that argument by a 2-1 vote in October, ruling that Amazon's search results pages do not confuse consumers. "The search results page makes clear to anyone who can read English that Amazon carries only the brands that are clearly and explicitly listed on the web page," 9th Circuit Judge Barry Silverman wrote in for the majority.

That ruling upheld a trial judge's decision to grant summary judgment to Amazon. The watchmaker, which doesn't allow its products to be sold on Amazon, is now asking the Supreme Court to hear the case. Multi Time Machine says it should have been able to argue to a jury that consumers were duped by Amazon's use of the brand's trademark.

"The introductory information of the search display lures the consumer into the false expectation that the displayed products have a connection to MTM's trademark," the company says in a petition filed last week with the U.S. Supreme Court.

While the 9th Circuit ultimately sided with Amazon, that ruling marked a reversal from July, when the judges sided with Multi-Time Machine. In the earlier ruling, Circuit Judges Carlos Bea and Gordon Quist concluded that Amazon potentially infringed trademark by causing so-called "initial interest confusion," which the judges described as confusion that "creates initial interest in a competitor's product."

The company argued that Amazon's practice differs from that of other e-commerce sites, like Overstock and Buy.com. In 2013, U.S. District Court Judge Dean Pregerson in the Central District of California sided with Amazon and dismissed the lawsuit, Pregerson ruled that Multi Time didn't present enough evidence to show that Amazon's practices confused consumers.

Multi-Time Machine then appealed to the 9th Circuit. Other Web companies, including Google, Twitter, Pinterest, eBay and Yahoo backed Amazon in the case. Those companies argued that Amazon shouldn't have to face litigation based on "a mere possibility of confusion by an unsophisticated consumer."