The Fall Of The House Of Downton 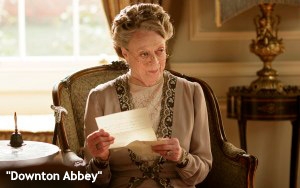 Everybody’s talking about the fall of Downton, but it’s not a conversation about the economic pressures in 1920s England that are wreaking havoc on the estates and manor houses this season on “Downton Abbey.”

It’s an ongoing discussion about the current sixth and final season of this once-electrifying PBS hit and how aimless it seems. The answer is surprisingly consistent every time you ask family members, friends, acquaintances or co-workers: What do you think of “Downton Abbey” this season?

“I’m just not feeling it,” goes one answer. “It’s too talky,” goes another. “Who cares about this tug of war between the Dowager Countess [Maggie Smith] and Isobel Crawley [Penelope Wilton] over the future of the hospital? This storyline has gone on for far too long. Bring it to a conclusion already!” say others.

The hospital conflict -- in which the Dowager opposes a proposed takeover of the town’s small country hospital by a larger hospital concern that will greatly modernize the facility -- seemed to come no closer to a resolution in last night’s episode in which it was once again the central storyline. Not even a visit for dinner by the Minister of Health -- future prime minister Neville Chamberlain -- seemed to move the story along, although it was another event at the same dinner that might bring the hospital story to a close once and for all.

This was the Earl of Grantham’s sudden coughing up of blood -- the result of a rupturing stomach ulcer. An ambulance was summoned and the Earl (Hugh Bonneville) was taken to the very hospital that has been the subject of so much hand-wringing. By the episode’s conclusion, he was reported to be out of surgery and hopefully on the mend.

However, the episode ended before we could learn how this sudden medical emergency might impact the hospital controversy. There were several hints that it might have helped the faction seeking modernization.

From a viewer’s perspective, the Earl’s near-death experience was highly welcome because it was an all-too-rare instance of real drama this season on “Downton.” But was it enough to save the show?

To apply a famous line from an old Preston Sturges movie (“Christmas in July,” one of the all-time great movies about advertising, as a matter of fact): “That all depends on what happens afterwards.”

Up until now, however, the “Downton Abbey” season has been characterized by a series of missteps, with the season’s nadir perhaps occurring in the third episode with the wedding of head housekeeper Mrs. Hughes (Phyllis Logan) and head butler Mr. Carson (Jim Carter).

“Downton” fans loved it when these two became engaged at the conclusion of Season Five last year. But now that this marriage has come to pass, it feels like a jump-the-shark moment for “Downton” -- something none of us ever expected.

And when Tom Branson (Allen Leech) suddenly showed up by surprise at the wedding, it played like an instance of poor storytelling. It made you wonder: How did he time this appearance anyway? Was this kind of precision-scheduling really possible then? He had presumably taken a transoceanic voyage to return to England, followed by various rail scenarios. His showing up at just that very moment didn’t seem believable. Nor was it the “moment of surprise” that its authors probably thought it would be. It would have felt more truthful to Tom’s story if he had just stayed in Boston.

Elsewhere this season, viewers are also tiring of the endless feud between the Dowager’s lady’s maid Denker (Sue Johnston) and the butler Mr. Sprat (Jeremy Swift). The love lives of ladies Mary (Michelle Dockery) and Edith (Laura Carmichael) are beginning to wear viewers out too, although both of them might now be close to finding husbands.

That’s a good thing, because this past weekend’s episode marked the season’s halfway point. Now, with only four episodes left to go, many questions remain unanswered.

Will Mr. Bates and Anna finally have a child? Will Daisy move in with Mr. Mason in his new farmhouse? Will the ubiquitous constable Sgt. Willis show up yet again to announce that someone else in the household is suspected of a crime? Will Mr. Molesley and Miss Baxter get engaged? Will Mrs. Hughes learn to cook a pork chop to Mr. Carson’s satisfaction? Can Barrow teach the new footman Andy to read in just four weeks?

These questions seem trivial compared to the biggest question of all: Can the Crawley estate survive the 1920s, or will it all tumble down like so many of its neighbors?

tv
5 comments about "The Fall Of The House Of Downton".
Check to receive email when comments are posted.
Read more comments >
Next story loading