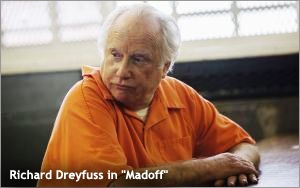 From O.J. Simpson to Bernie Madoff, prime-time TV this week is looking more like "America’s Most Wanted" every day.

One night after "The People v. O.J. Simpson" premiered on FX, ABC on Wednesday (Feb. 3) presents the first half of its four-hour saga titled simply "Madoff" (the second half airs Thursday night).

It is the first of two made-for-TV Madoff productions due to air this year. This one stars Richard Dreyfuss in the title role, with Blythe Danner as Bernie’s wife, Ruth. The other one is in production at HBO. It is called "The Wizard of Lies" and stars Robert De Niro and Michelle Pfeiffer as the Madoffs. No premiere date has yet been set.

So ABC gets first dibs on the telling of the Madoff story. And the device the network has chosen to tell it is a four-hour miniseries -- a rare enough occurrence for network TV these days -- in which much of the story is told through voiceover narration provided by Dreyfuss in the voice of Bernie.

This narration is written and delivered in such a way that it might remind crime-film devotees of the way Ray Liotta narrated the story in “Goodfellas.” The device worked then and it works here for the same reason: Financial fraud, like the inner workings of a mafia branch working in an obscure corner of Queens, N.Y., is a complicated subject. In "Madoff," the narration sets the tone of the miniseries and goes a long way toward guiding viewers through a subject that might not ordinarily be comprehensible to many of them.

In fact, the story of the Madoff Ponzi scheme and its gradual unraveling is complicated enough to justify this production’s four-hour length. As entertainment, the length is justified too.

Dreyfuss’s portrayal of Madoff differs from Cuba Gooding Jr.’s portrayal of O.J. Simpson in the FX series in one important way: We all knew O.J. -- his voice, his physicality and his mannerisms (at least the ones he showed us in public).

But we don’t know the real Madoff at all, since he was not the public figure O.J. was. The only recurring image we really have of Madoff is the footage shown a million times on TV of him attempting to round the corner toward his home at 64th Street and Lexington Avenue and getting into a shoving match with photographers. Throughout this encounter, he says nothing.

So Dreyfuss gets to play him without our knowing very much about the real man. Appropriately, Dreyfuss plays Madoff like a man leading two lives. One is the man in charge of an investment firm whose returns are so miraculous that the Wall Street community nicknames him The Magician. The other is a man who secretly plots and maintains this huge Ponzi scheme, with the help of a handful of employees who are also in the know. In “Madoff,” the private man is more mafia don than Wall Street magician.

As is common for TV movies of this type, “Madoff” comes with a disclaimer about shortcuts and other devices the writers and producers adopted to tell this story that deviate from the actual truth. “Some characters, businesses, scenes and chronologies have been invented, altererd [sic] or consolidated for dramatic purposes,” read this sloppy disclaimer on the version I previewed on ABC’s media Web site. Hopefully this typo will be fixed in time for air.

Another thing they should think of fixing: As Bernie is about to meet with lawyers from the Securities and Exchange Commission (SEC), a conference room is identified on screen as “F.C.C. offices,” as if some production assistant mistook "SEC" for "FCC" and no one higher up apparently caught the error (unless this too is to be fixed before airtime).

Please do not let these typos spoil your good time if you are planning to watch “Madoff.” It is well worth checking out.