Doritos To 'Crash the Second Screen' During Super Bowl 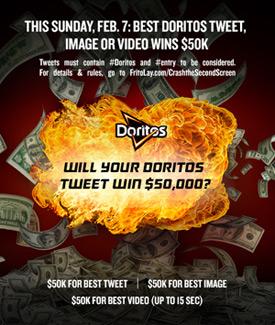 Doritos is introducing a new, social media-focused contest during this year’s Super Bowl, as it bids adieu to its long-running, phenomenally successful “Crash the Super Bowl” amateur ad-creation contest.

The best text-based, video and photo tweets will each win $50,000. The three winners will be announced on Monday.

The new contest is designed to engage people in a way that reflects the social and mobile revolution that’s occurred during the 10 years the original Crash contest has been running, Ram Krishnan, CMO for Frito-Lay, tells Marketing Daily.

“Crash the Super Bowl was ahead of its time — we basically originated user-generated content,” Krishnan says. “But that contest was primarily focused on TV media. Today, 87% of consumers use a second screen for consuming live events. And anyone who has a smartphone can create great content.”

Krishnan says that the number of tweets generated by the new contest actually won’t be deemed the most important metric for judging its success. Noting that there were some 29 million tweets during last year’s Super Bowl game, he says that the main goal during the game is to break through the clutter to have “authentic” social conversations with fans, so as to make a connection that keeps them engaged with the brand during the rest of the year.

Most important, of course, is actually selling Doritos—and now that social media users can be tied to in-store purchases through data partnerships, that’s readily assessed.

Krishnan stresses, however, that Super Bowl activations are “just the exclamation mark,” after about six months of cross-media sales-generating activations leading up to the big day.