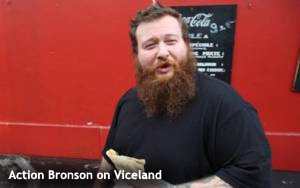 The f-word is now infiltrating the very titles of our TV shows. Exhibit A: An f-word-titled show that came to the TV Blog’s attention the other day via a press release from the soon-to-be-launched cable network known as Viceland.

This new show proudly announced by Viceland is titled “F*ck, That’s Delicious,” although this title seems like overkill for a show in which a bearded guy and his two pals apparently go in search of good things to eat -- just like a dozen other shows seen elsewhere for years. Earth to Viceland: There are other ways of titling shows and praising the foods one eats.

For example, with his tattoos, dyed spiky hair, goatee and jewelry, Guy Fieri takes a backseat to no one in the hipster-cred department on his Food Network show “Diners, Drive-Ins and Dives.” And yet, when Guy likes something he’s eating, he somehow manages to avoid exclaiming, “Sh*t! That’s Good!” Or “That’s the best effin’ pot pie I ever tasted!” Instead, Guy talks rather quaintly about taking trips to “Flavortown” or declaring of a plate of fried chicken he admires: “Winner winner, chicken dinner!”

This approach is not for Action Bronson, though. He’s the bearded fellow in the photo above that came with the press release provided by Viceland. In the context of this show with the f-word in the title, he almost looks like he’s saying “F--- you!” in the photo. Hey, same to you, Action!

While Viceland makes a wan attempt at covering the f-word in the show’s title in its press release and in the TV version of this show, the unbleeped f-word is not a problem when it comes to promoting the show on YouTube. The trailer posted on YouTube is a veritable f-word festival.

Viceland is a new cable network whose programming is being produced by the folks at Vice Media under an agreement with A&E Networks. Viceland is due to replace one of A&E’s lesser-viewed networks -- the History Channel spinoff H2 -- on Feb. 29. “F*ck, That’s Delicious” premieres March 3.

This Viceland network has another show with the unfortunate title “Balls Deep,” and it’s not about a football team’s emphasis on the passing game. It’s a travel show of some sort in which the host explores various subcultures around the globe -- going “deep” into his subjects apparently.

“Most TV shows are just a collection of shows,” starts the Viceland positioning statement included in the press release for “F*ck, That’s Delicious.”

“Viceland is a collection of personal points-of-view,” this boilerplate continues. “Everything at Viceland has a reason to exist and [yada yada yada] our mission is to examine the world we live in, and explore the things that confuse us, make us curious, make us laugh, or awaken our sense of wonder.”

“F*ck, That’s Delicious” does indeed awaken a sense of wonder -- namely, wondering why this was the only title they could think of. This Action Bronson guy is described in the YouTube trailer as a food-rapper -- that is, a rapper who discovered that food is not a subject that is commonly rapped about (if at all). So he decided to build this niche for himself, which has now led to him getting his own TV show in which he raps, eats and smokes dope.

These activities form the substance of the show and the trailer on YouTube, which brings me back to Viceland’s decision to partially title this show with the f-word.

The title is supposed to mark Viceland as edgy, gutsy, rebellious, and in touch with hipster culture (I guess). But if Viceland had any real guts, they would have spelled out this f-word in the title and put it on television uncensored. Instead, they plastered an asterisk over the “u” and civilization as we know it on television is saved.